This is my attempt to train, visualize and evaluate emoji embeddings as presented by Ben Eisner, Tim Rocktäschel, Isabelle Augenstein, Matko Bošnjak, and Sebastian Riedel in their paper. Most of their results are used here to build an equivalently robust model in Keras, including the rather simple training process which is solely based on emoji descriptions, but instead of using word2vec (as it was originally proposed) this version uses global vectors.

The code included in this repository has been tested to work with Python 3.5 on an Ubuntu 16.04 machine, using Keras 2.0.8 with Tensorflow as the backend.

Following Eisner's paper [1], training is based on 6088 descriptions of 1661 distinct emojis. Since all descriptions are valid, we randomly sample negative instances so that there is one positive example per negative example. This approach proved to produce the best results, as stated in the paper.

There are two architectures on which emoji vectors have been trained: Not like in the referenced paper, we used global vectors which need to be downloaded and placed in the res/glove directory. You can either download them from the original GloVe page or you can run these bash commands:

All the hyperparameters can be easily changed through a command line interface as described below:

To train your own emoji embeddings, run python3 emoji2vec.py and use the arguments described above to tune your hyperparameters.

Here is an example that will train 300-dimensional emoji vectors using the LSTM-based architecture with a maximum sequence length of 20, batch size of 8, 40 epochs, a dropout of 0.5, a learning rate of 0.0001 and 300 dense units:

The script given above will create and save several files:

For the pre-trained embeddings provided in this repository (trained on the originally proposed architecture), the following hyperparameter settings have been made (respecting, in large terms, the original authors' decisions):

For the LSTM-based pre-trained embeddings provided in the download link, the following hyperparameter settings have been made:

Example code for how to use emoji embeddings, after downloading them and setting up their dimension (embedding_dim):

A nice visualization of the emoji embeddings has been obtained by using t-SNE to project from N-dimensions into 2-dimensions. For practical purposes, only a fraction of the available emojis has been projected (the most frequent ones, extracted according to emoji_frequencies.txt).

Here, the top 200 most popular emojis have been projected in a 2D space: 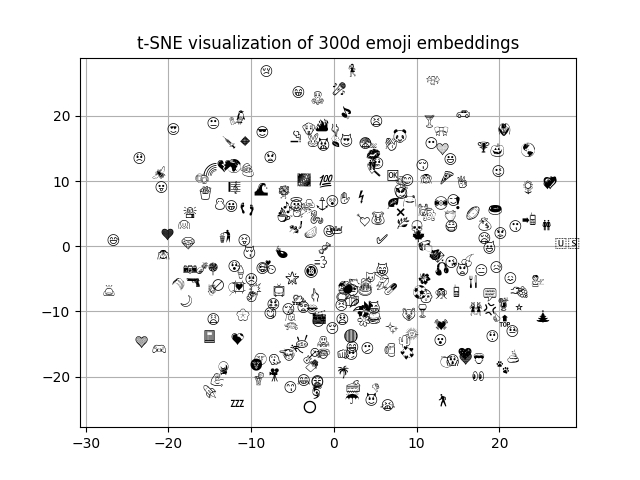 The trained emoji embeddings are evaluated on an analogy task, in a similar manner as word embeddings. Because these analogies are broadly interpreted as similarities between pairs of emojis, the embeddings are useful and extendible to other tasks if they can capture meaningful linear relationships between emojis directly from the vector space [1].

According to ACL's wiki page, a proportional analogy holds between two word pairs: a-a* :: b-b* (a is to a* as b is to b*). For example, Tokyo is to Japan as Paris is to France and a king is to a man as a queen is to a woman.

Therefore, in the current analogy task, we aim to find the 5 most suitable emojis to solve a - b + c = ? by measuring the cosine distance between the trained emoji vectors.

Here are some of the analogies obtained: 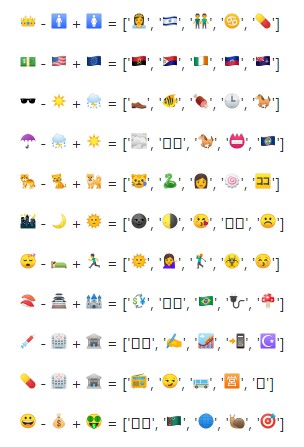 Sentiment analysis in computational linguistics is a general term for techniques that quantify sentiment or mood in a text.
13 May 2021
Emoji for Python. This project was inspired by kyokomi.
13 May 2021
emoji is a pure SQL PostgreSQL extension to encode/decode bytea/text to/from emoji.
25 January 2021