This repository contains the code to reproduce results for the paper cited above, where the authors presents a novel feature attribution technique based on Wasserstein Generative Adversarial Networks (WGAN). The code works for both synthetic (2D) and real 3D neuroimaging data, you can check below for a brief description of the two datasets.

Here is an example of what the generator/mapper network should produce: ctrl-click on the below image to open the gifv in a new tab (one frame every 50 iterations, left: input, right: anomaly map for synthetic data at iteration 50 * (its + 1)). 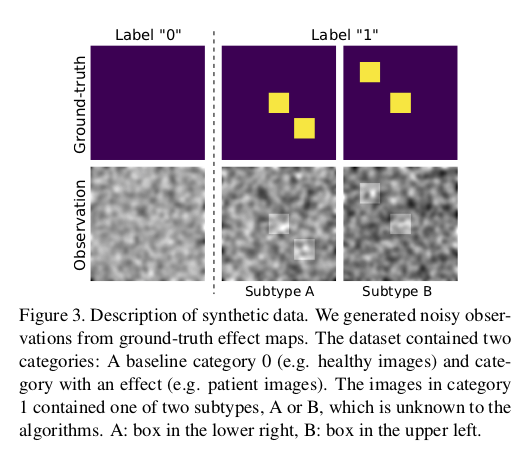 "Data:
In order to quantitatively evaluate the performance
of the examined visual attribution methods, we generated
a synthetic dataset of 10000 112x112 images with two
classes, which model a healthy control group (label 0) and a
patient group (label 1). The images were split evenly across
the two categories. We closely followed the synthetic data
generation process described in [31][SubCMap: Subject and Condition Specific Effect Maps]
where disease effects were studied in smaller cohorts of registered images.
The control group (label 0) contained images with ran-
dom iid Gaussian noise convolved with a Gaussian blurring
filter. Examples are shown in Fig. 3. The patient images
(label 1) also contained the noise, but additionally exhib-
ited one of two disease effects which was generated from a
ground-truth effect map: a square in the centre and a square
in the lower right (subtype A), or a square in the centre and a
square in the upper left (subtype B). Importantly, both dis-
ease subtypes shared the same label. The location of the
off-centre squares was randomly offset in each direction by
a maximum of 5 pixels. This moving effect was added to
make the problem harder, but had no notable effect on the
outcome."

Currently we only implemented training on synthetic dataset, we will work on implement training on ADNI dataset asap (but pull requests are welcome as always), we put below ADNI dataset details for sake of completeness.

"We selected 5778 3D T1-weighted MR images from
1288 subjects with either an MCI (label 0) or AD (label 1) diagnosis from the ADNI cohort. 2839 of the images
were acquired using a 1.5T magnet, the remainder using a
3T magnet. The subjects are scanned at regular intervals as
part of the ADNI study and a number of subjects converted
from MCI to AD over the years. We did not use these cor-
respondences for training, however, we took advantage of it
for evaluation as will be described later.
All images were processed using standard operations
available in the FSL toolbox [52][Advances in functional and structural MR
image analysis and implementation as FSL.] in order to reorient and
rigidly register the images to MNI space, crop them and
correct for field inhomogeneities. We then skull-stripped
the images using the ROBEX algorithm [24][Robust brain extraction across datasets and comparison with
publicly available methods]. Lastly, we
resampled all images to a resolution of 1.3 mm 3 and nor-
malised them to a range from -1 to 1. The final volumes
had a size of 128x160x112 voxels."

"Data used in preparation of this article were obtained from
the Alzheimers disease Neuroimaging Initiative (ADNI) database
(adni.loni.usc.edu).
As such, the investigators within the ADNI
contributed to the design and implementation of ADNI and/or provided data but
did not participate in analysis or writing of this
report. A complete listing of ADNI investigators can be found at:
http://adni.loni.usc.edu/wp-content/uploads/how_to_apply/ADNI_Acknowledgement_List.pdf"

To train the WGAN on this task, cd into this repo's src root folder and execute:

Running the command without arguments will train the models with the default hyperparamters values (producing results shown above).

We ported all models found in the original repository in PyTorch, you can find all implemented models here: https://github.com/orobix/Visual-Feature-Attribution-Using-Wasserstein-GANs-Pytorch/tree/master/src/models

cite the paper as follows (copied-pasted it from arxiv for you):

Add styles from famous paintings to any photo in a fraction of a second
20 September 2021
Toward Realistic Single-View 3D Object Reconstruction with Unsupervised Learning from Multiple Images
29 September 2021
Fit to detect people and different types of land vehicles, and displaying their density on a fitted map in python
29 September 2021