WindowCreator is in a very early state, everything is subject to change.

WindowCreator is a python utility made to eliminate the need for a virtual machine to get an image of a error box. It will also be able to work as a python library for making crazy error videos. 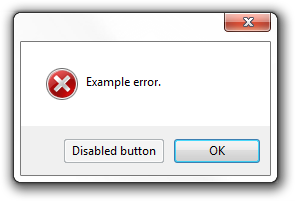 (the black background is a github bug, the image has normal transparency)

The main file is generate.py, open it in an editor because in its current state, it’s just a function dump where you have to go to the end of the file and put what window generating function you want. There are examples in the comments at the bottom, just uncomment any line and see the result.

Windows 10 and 11 are not planned to be supported

A script to dump files and folders remotely from a Windows SMB share.
17 February 2022
Create Fud Meterpreter Payload To Hack Windows 11
01 February 2022
A tool to build scripts to toggle between minimal & default services in Windows based on user defined lists
17 January 2022
A python script that changes our background based on current weather and time of the day
16 November 2021
A python Script For Taking Screenshot Of Windows
12 November 2021
FindUncommonShares.py is a Python equivalent of PowerView's Invoke-ShareFinder.ps1
07 October 2021
Simple Windows Based Chat Application
22 June 2022
A python script to scrape a pdf file and create a word index out of it
22 June 2022