Manifold is a model-agnostic visual debugging tool for machine learning.

Understanding ML model performance and behavior is a non-trivial process, given the intrisic opacity of ML algorithms. Performance summary statistics such as AUC, RMSE, and others are not instructive enough for identifying what went wrong with a model or how to improve it.

As a visual analytics tool, Manifold allows ML practitioners to look beyond overall summary metrics to detect which subset of data a model is inaccurately predicting. Manifold also explains the potential cause of poor model performance by surfacing the feature distribution difference between better and worse-performing subsets of data.

There are 2 ways to input data into Manifold:

In either case, data that's directly input into Manifold should follow this format:

Each element in these arrays represents one data point in your evaluation dataset, and the order of data instances in x, yPred and yTrue should all match.
The recommended instance count for each of these datasets is 10000 - 15000. If you have a larger dataset that you want to analyze, a random subset of your data generally suffices to reveal the important patterns in it.

A list of instances with features. Example (2 data instances):

A list of lists, where each child list is a prediction array from one model for each data instance. Example (3 models, 2 data instances, 2 classes ['false', 'true']):

A list, ground truth for each data instance. Values must be numbers for regression models, must be strings that match object keys in yPred for classification models. Example (2 data instances, 2 classes ['false', 'true']):

This guide explains how to interpret Manifold visualizations.

This visualization is an overview of performance of your model(s) across
different segments of your data. It helps you identify under-performing data subsets for further inspection. 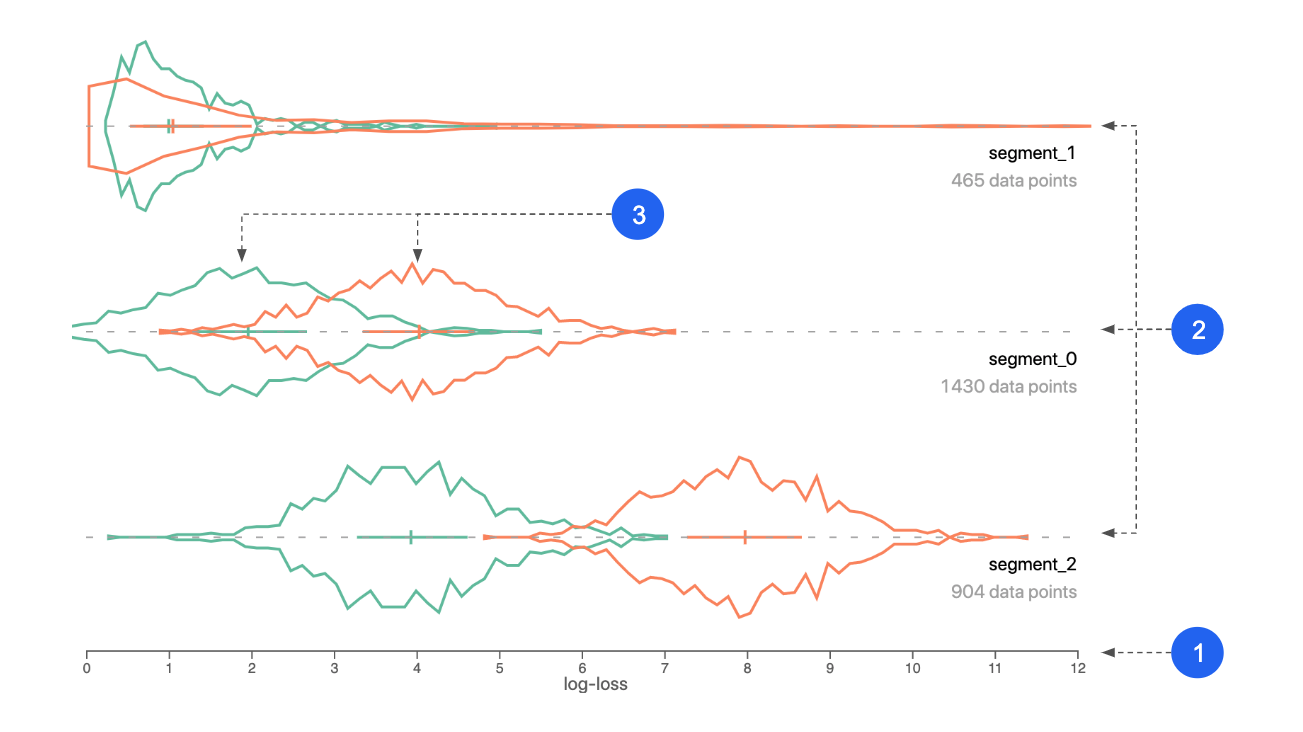 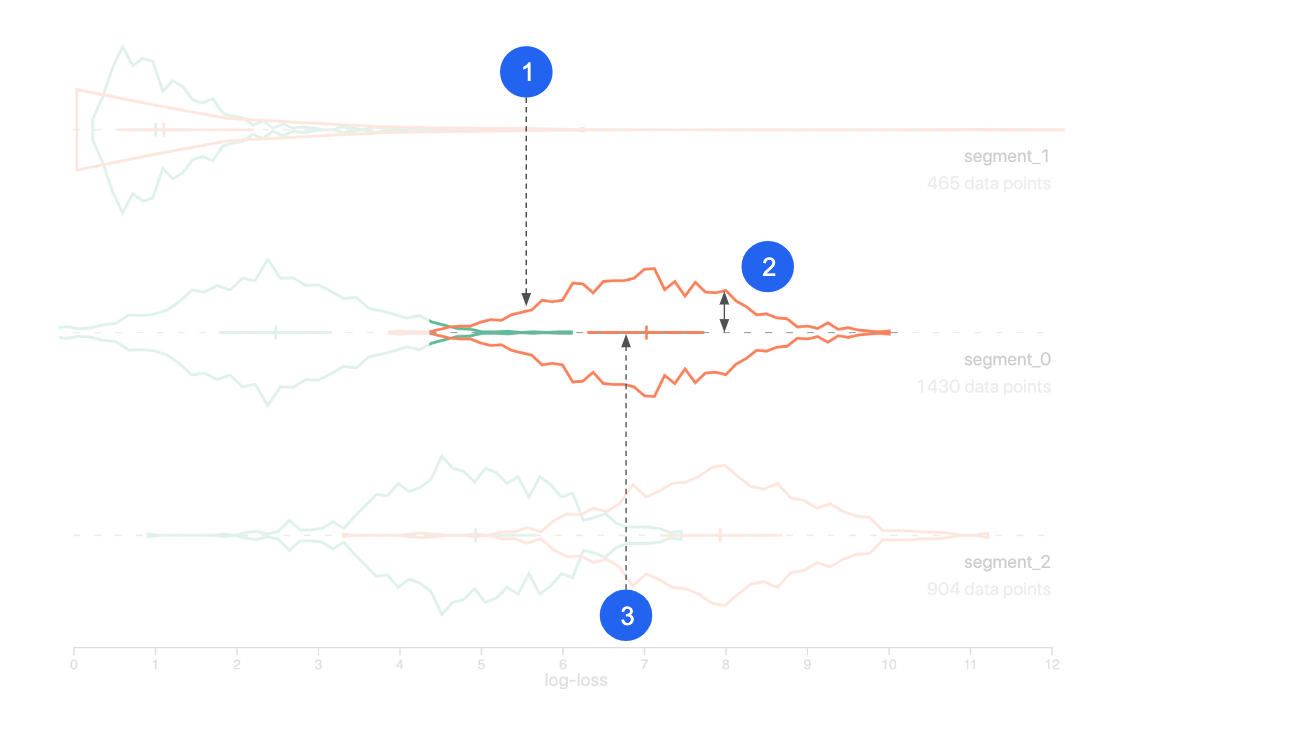 If you're analyzing multiple models, all model performance metrics will be included in the input. 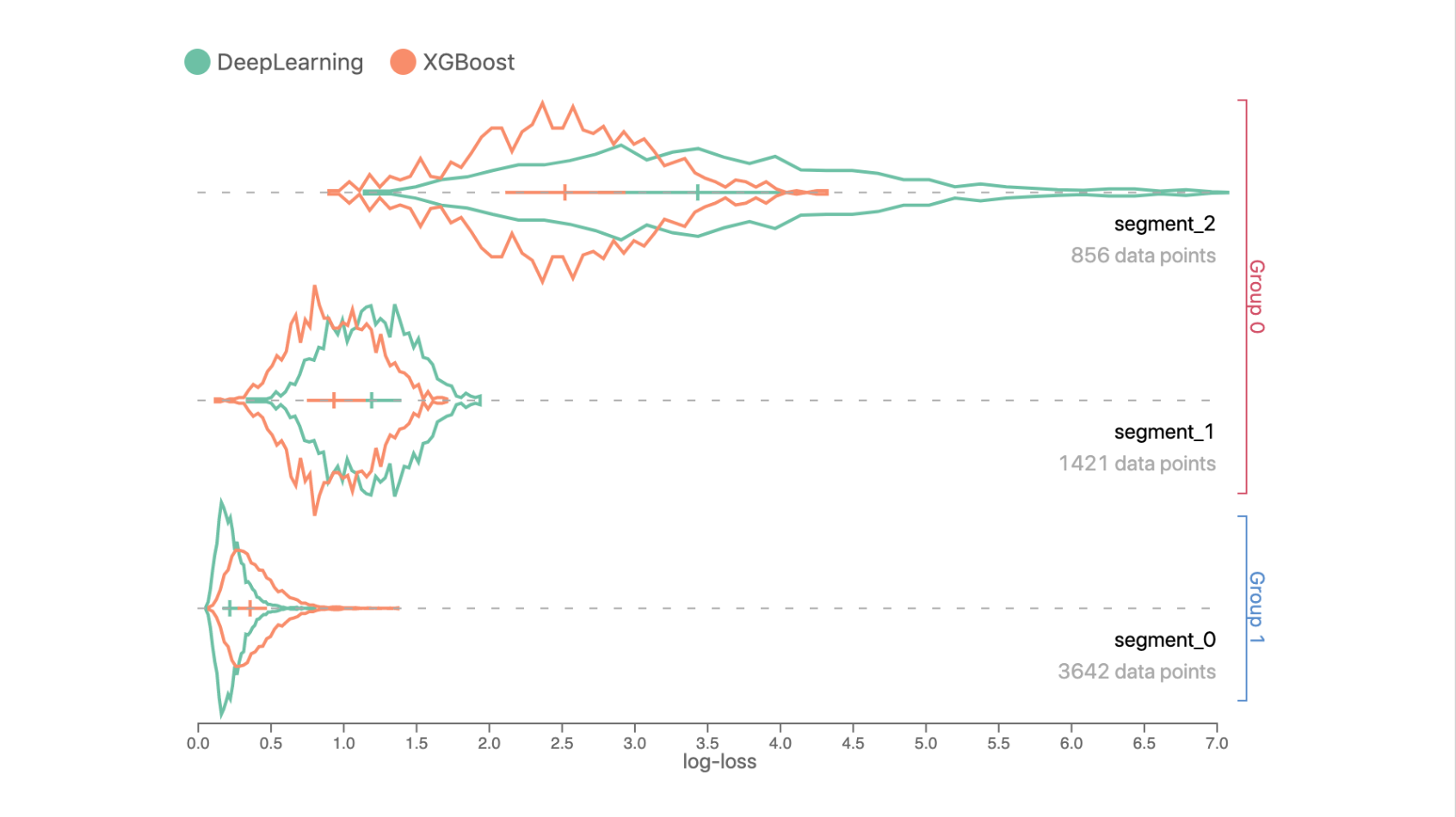 Data in Segment 0 has a lower log-loss prediction error compared to Segments 1 and 2, since curves in Segment 0 are closer to the left side.

In Segments 1 and 2, the XGBoost model performs better than the DeepLearning model, but DeepLearning outperforms XGBoost in Segment 0.

This visualization shows feature values of your data, aggregated by user-defined segments. It helps you identify any input feature distribution that might correlate with inaccurate prediction output. 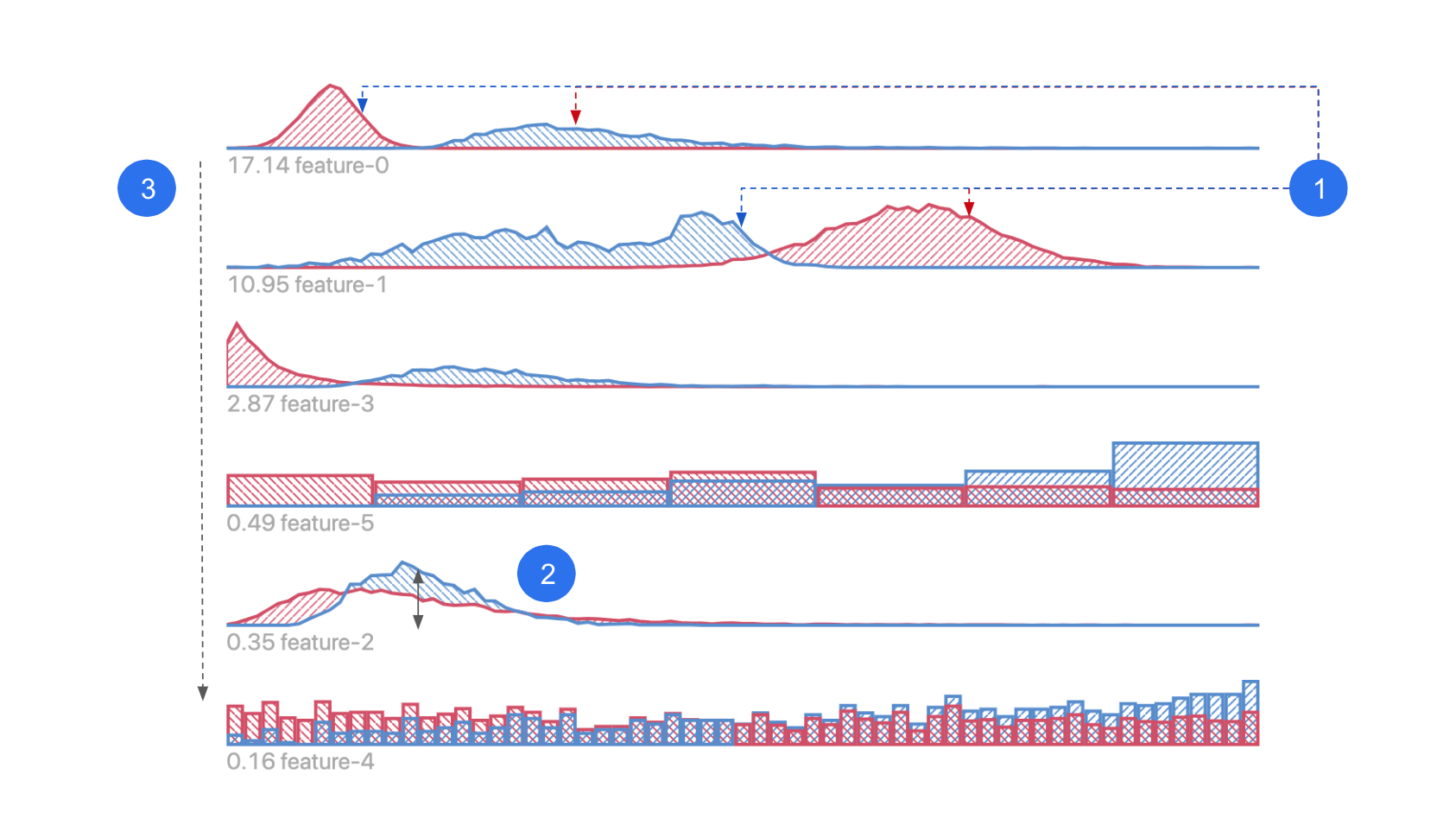 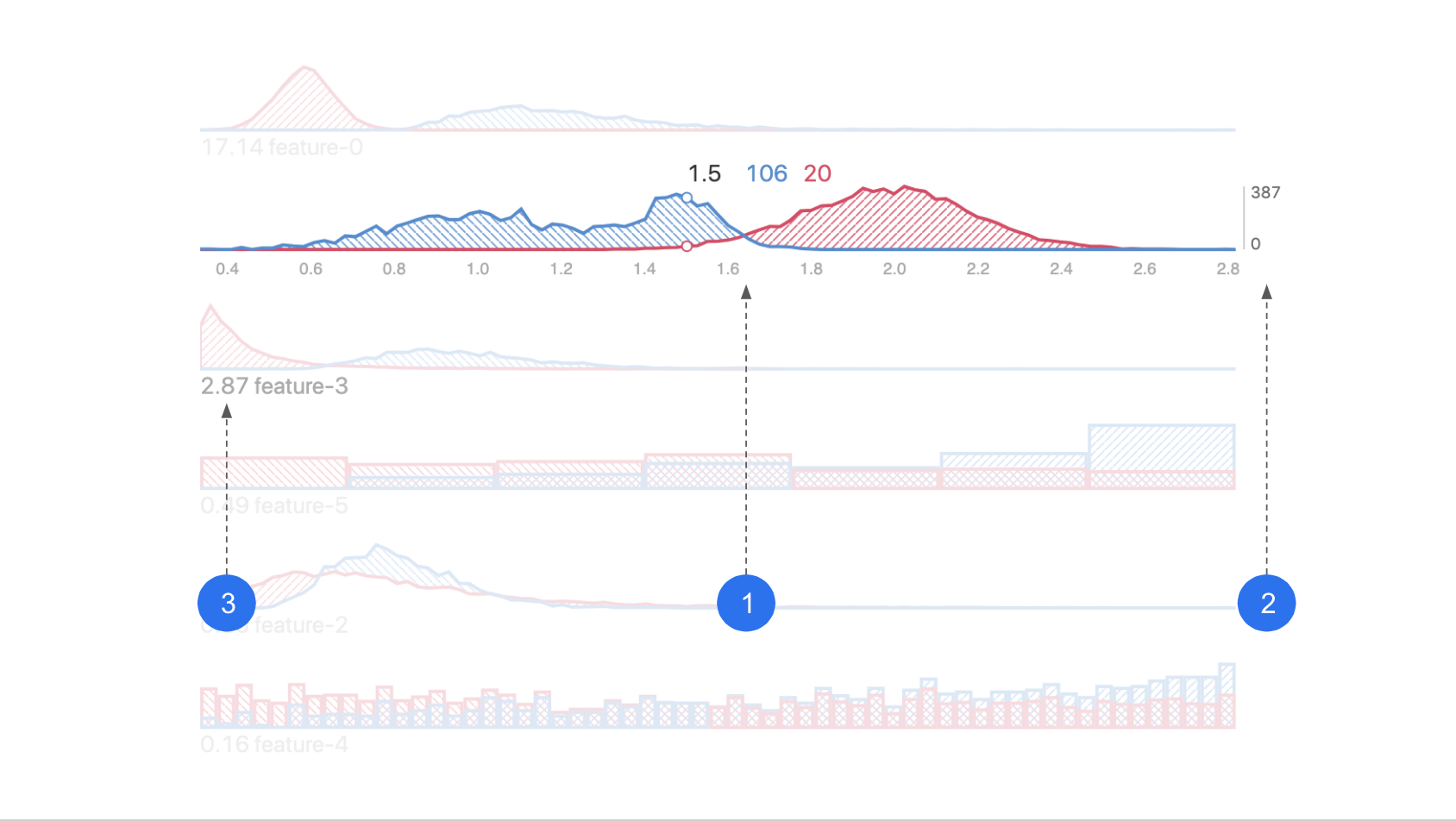 After you slice the data to create segment groups, feature distribution histograms/heatmaps from the two segment groups are shown in this view.

Features are ranked by their KL-Divergence - a measure of difference between the two contrasting distributions. The higher the divergence is, the more likely this feature is correlated with the factor that differentiates the two Segment Groups. 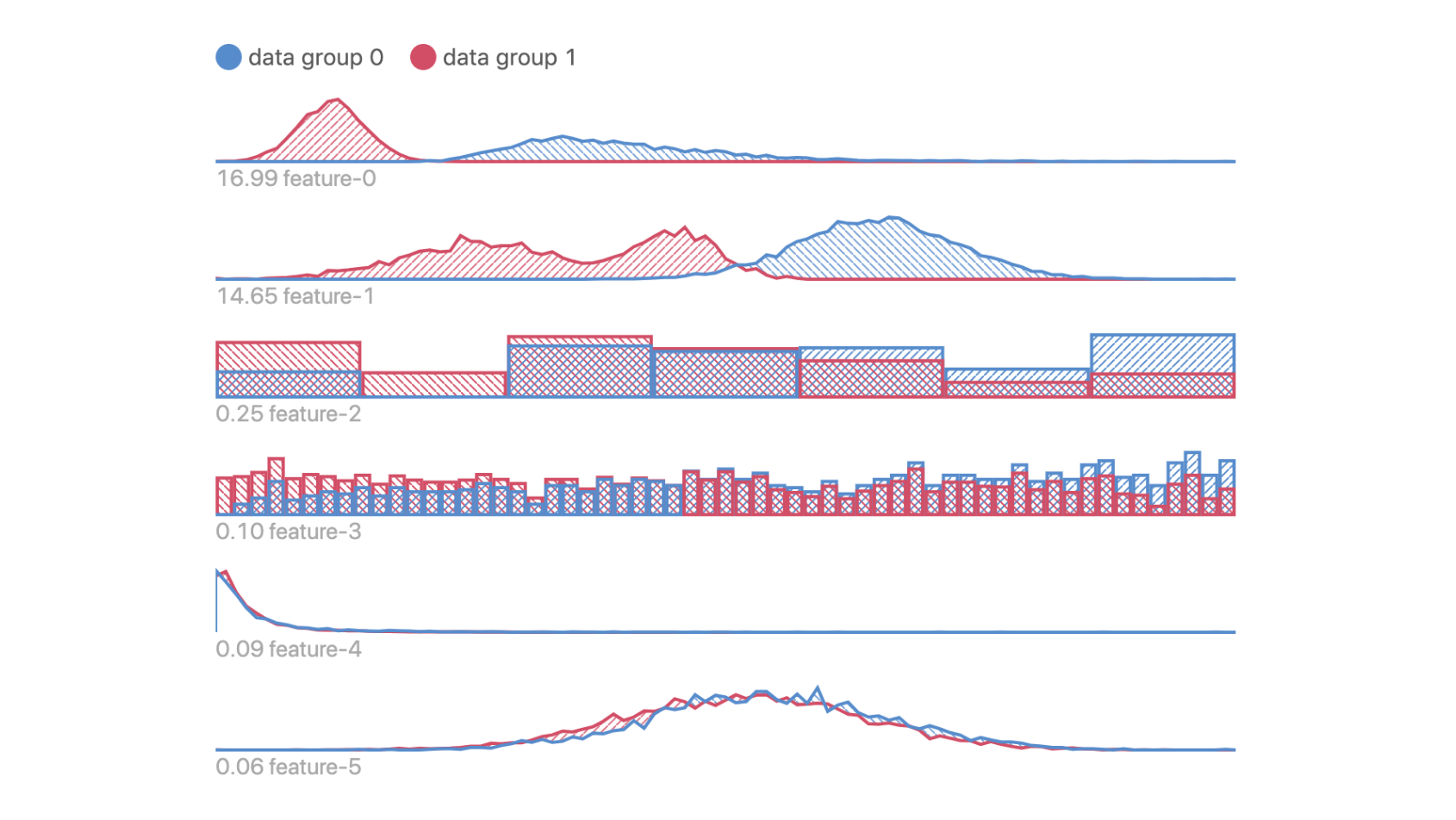 Suppose Data Groups 0 and 1 correspond to data instances with low and high prediction error respectively, this means that data with higher errors tend to have lower feature values in Features 0 and 1, since peak of pink curve is to the left side of the blue curve.

If there are geospatial features in your dataset, they will be displayed on a map. Lat-lng coordinates and h3 hexagon ids are currently supoorted geo feature types. 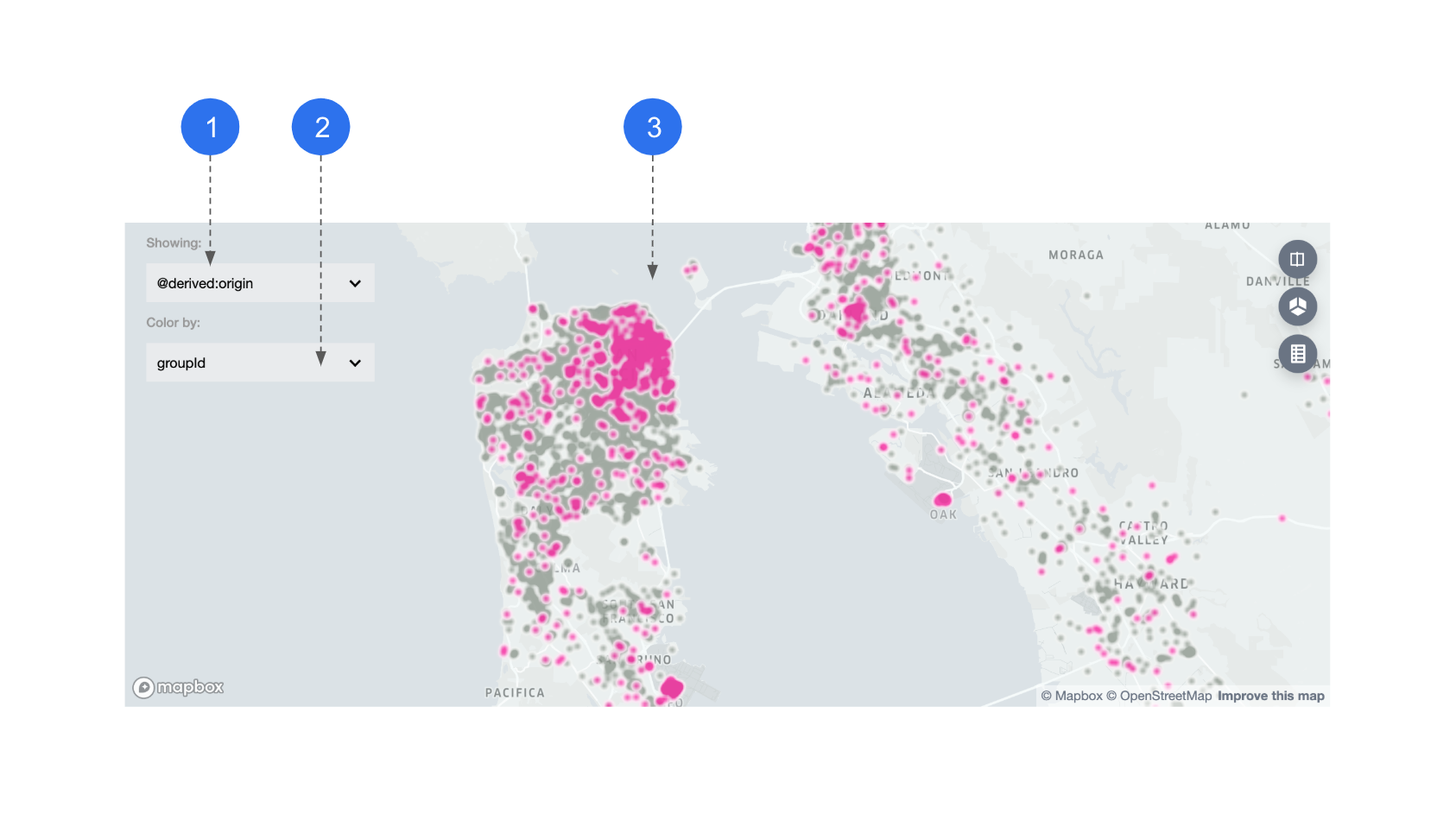 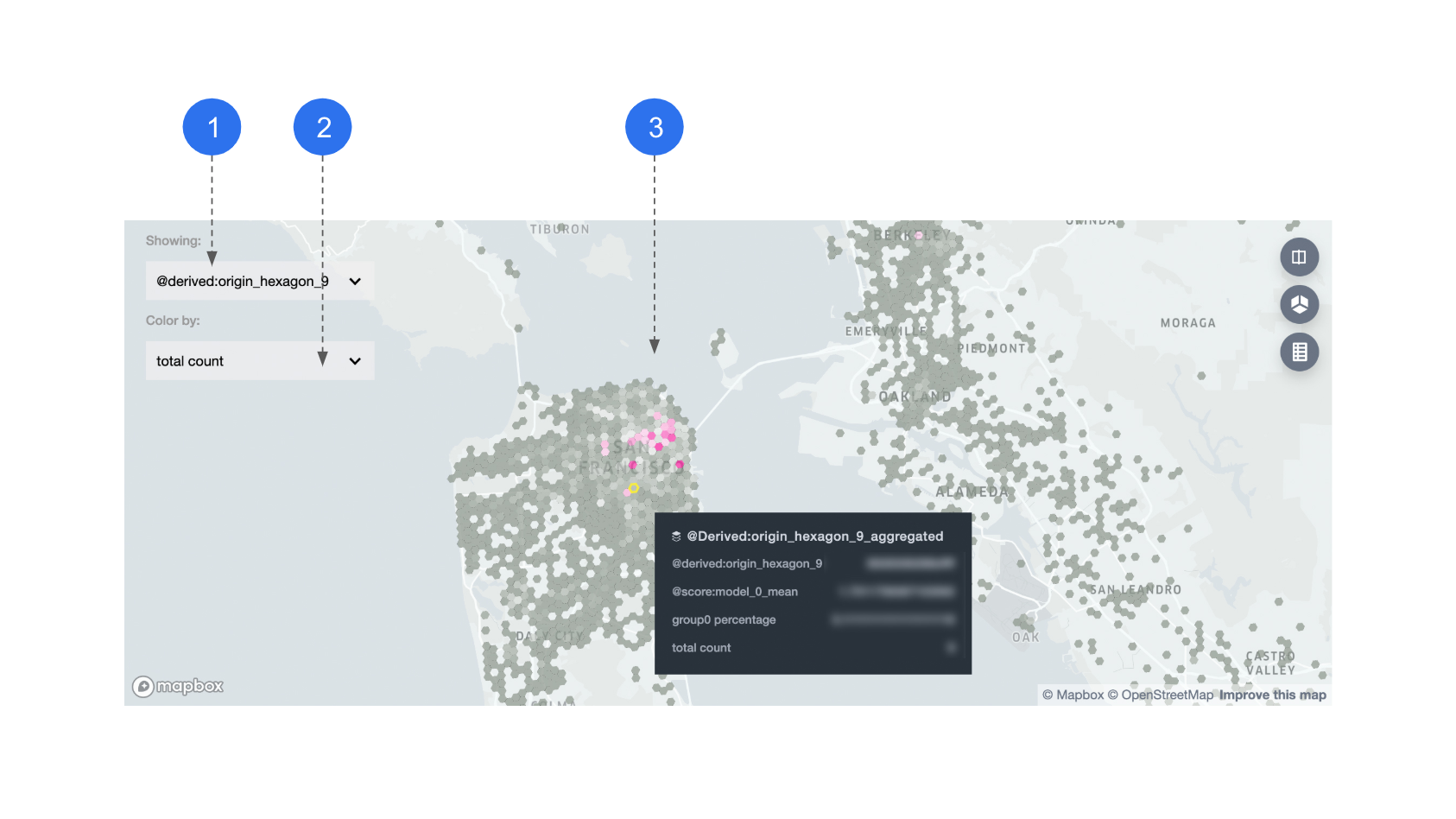 In the first map above, Group 0 has a more obvious tendency to be concentrated in downtown San Francisco area.

To do a one-off evaluation using static outputs of your ML models, use the demo app.
Otherwise, if you have a system that programmatically generates ML model outputs, you might consider using the Manifold component directly.

Run the following commands to set up your environment and run the demo:

Now you should see the demo app running at localhost:8080.

Once the app starts running, you will see the interface above asking you to upload "feature", "prediction" and "ground truth" datasets to Manifold.
They correspond to x, yPred, and yTrue in the "prepare your data" section, and you should prepare your CSV files accordingly, illustrated below:

Once the datasets are uploaded, you will see visualizations generated by these datasets.

Embedding the Manifold component in your app allows you to programmatically generate ML model data and visualize.
Otherwise, if you have some static output from some models and want to do a one-off evaluation, you might consider using the demo app directly.

Here are the basic steps to import Manifold into your app and load data for visualizing. You can also take a look at the examples folder.

In order to load your data files to Manifold, use the loadLocalData action. You could also reshape your data into the required Manifold format using dataTransformer.

One or more datasets, in CSV format. Could be ones that your backend returns.

A function that transforms fileList into the Manifold input data format. Default:

Manifold uses Redux to manage its internal state. You need to register manifoldReducer to the main reducer of your app:

If you mount manifoldReducer in another address instead of manifold in the step above, you need to specify the path to it when you mount the component with the getState prop. width and height are both needed explicitly. If you have geospatial features and need to see them on a map, you also need a mapbox token.

Manifold uses baseui, which uses Styletron as a styling engine. If you don't already use Styletron in other parts of your app, make sure to wrap Manifold with the styletron provider.

Manifold uses the baseui theming API. The default theme used by Manifold is exported as THEME. You can customize the styling by extending THEME and passing it as a theme prop of the Manifold component.