Introduction: ImagePy is an image processing software developed in Python, supporting bmp, rgb, png and other commonly used image formats. It can handle grayscale images and multi-channel (color) images, and supports image stack (sequence) operations. It supports a variety of selection operations (point, line, surface, multi-line, multi-face, hollow polygon). It can carry out a variety of commonly used mathematical operations, commonly used filter operation, image measurements, as well as pixel statistics. It can carry on dem surface reconstruction and three-dimensional reconstruction of image sequences. And the framework is based around Python development. The image data is represented by numpy. And thus it can easily access scikit-image, opencv, itk, mayavi and other third-party mature image processing libraries.

works on windows, linux, mac, under python2.7 and python3.4+

The main interface consists of four parts, from top to bottom: the title bar, menu bar, toolbar, and status bar.
Here are a few examples to illustrate what ImagePy can do. 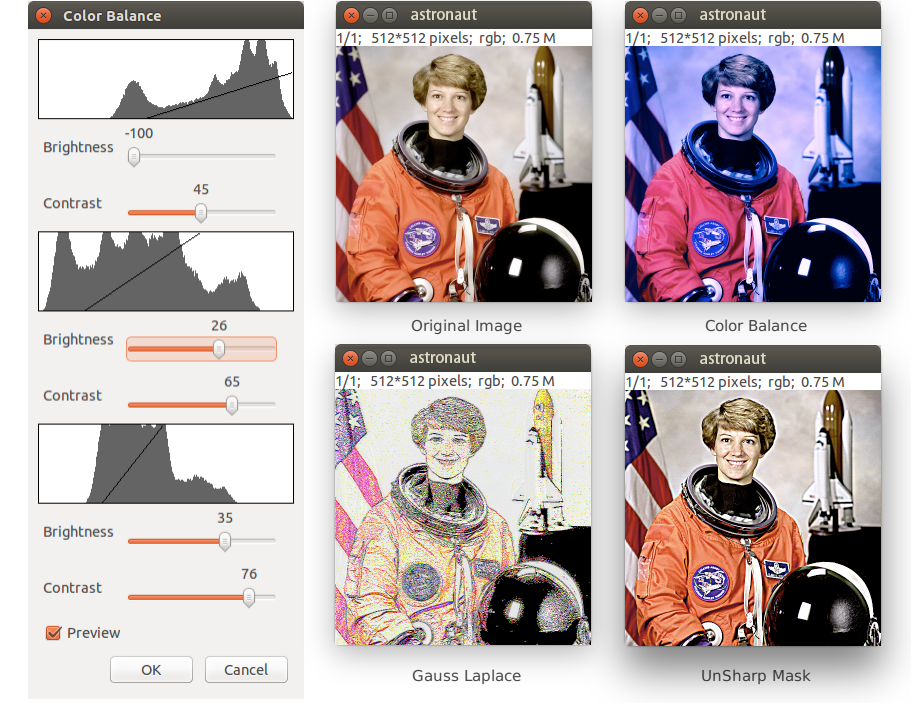 Selection Introduction:
Selection refers to processing the image only in the the specific identification areas on the image. ImagePy supports single point, multi-point, single line, multi-line, rectangular, circular, arbitrary polygon and free curve selection. It can superimpose something using Shift key, hollow out something using Ctrl key. In addition, all the selection objects can carry out expansion, shrink, convex hull and other geometric operations.

Second example: An example of a cell count

Index color is also called false color. The essence of it is to map the gray color to a predefined spectrum. The index color does not increase the amount of information in the image, but does enhance the visual contrast.

Here, for a cell under a microscope, we organize the image and compute statistics.

Use the Surf feature matching algorithm implemented in OpenCV. 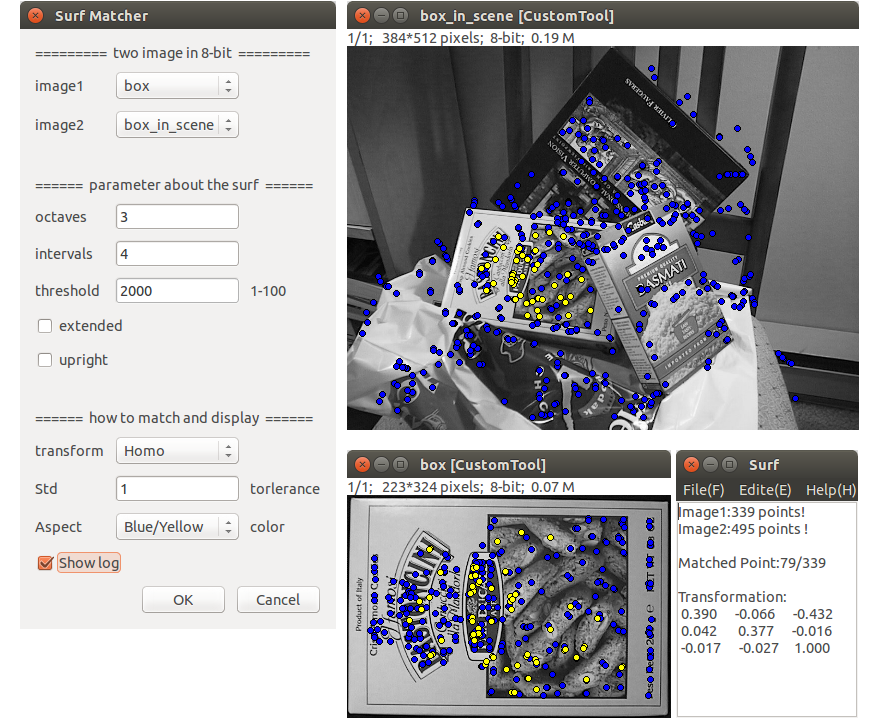 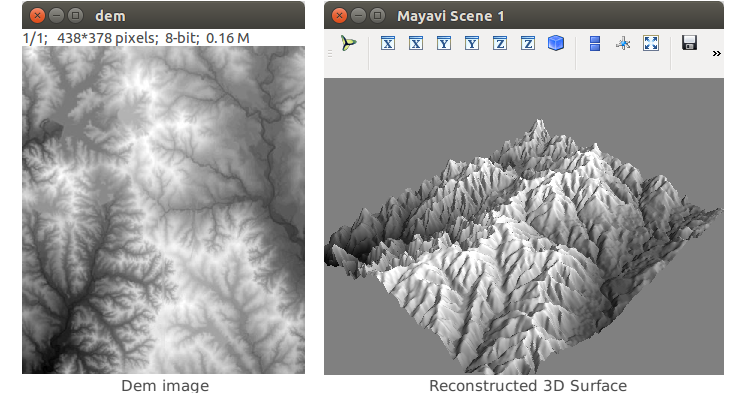 Dem is the digital elevation model, which means that the brightness of the image represents the elevation. Through the Dem data, you can calculate the height, slope. You can draw contours, and perform surface reconstruction.

The following image represents dental MicroCT data. The data were filtered, segmented and three-dimensional reconstructed, as well as visually manipulated. 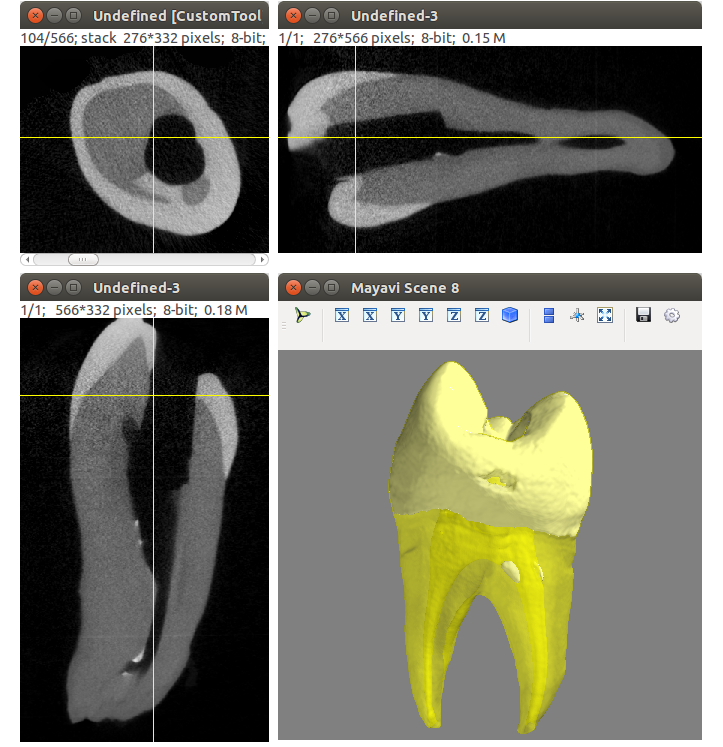 The figure above is a tooth CT data. Importing the image sequence, you can view the three views, and then go on its three-dimensional reconstruction.

In ImagePy itself, each functional component is plug-in (all menus, tools). The implementation of each function, in essence, is through interaction to get a group of parameters and then act on the current image. We can view the plug-in's organizational structure in Plugin Tree View, find plug-ins quickly in Plugin List View, record macros in Macros Recorder, and batch process when needed to do series of related functions and improve work efficiency.

From the two views above, you can get a global view of all the plug-ins, like viewing its related information, introduction, and source code. You can
quickly find the commands. You can run a related command directly by double-clicking.

After each step, Macros Recorder will add a log. When all is completed, you can get the following log:

These logs, each line essentially records “plug-in name> {parameter}”. Click “Run> Run Macros (F5)” to perform each action of the record in turn. You can also use the mouse to select a line or a few lines. Click “Run> Run Line (F6)” to implement the selected line. In addition macros have the following characteristics.

The examples above only list some of the functionality of the ImagePy. However, ImagePy is not only an image processing program, but a highly scalable framework. Any numpy-based processing function can be easily incorporated. For example, to make a Gaussian blur filter, we only need：

What has the framework helped us do?

Another scenario is to interact on the canvas through the mouse, like the selection operations mentioned above. Here is an example of a brush: 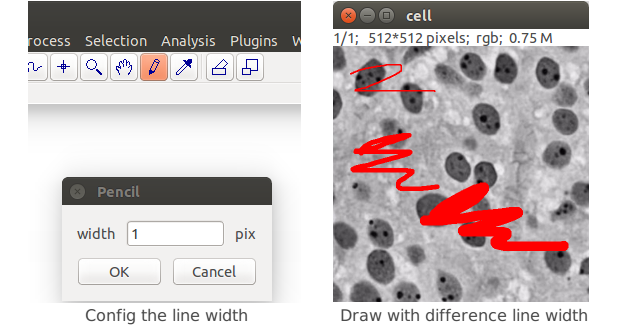 A bot that extract text from images using the Tesseract OCR.
18 May 2021
Pillow is the friendly PIL fork by Alex Clark and Contributors.
13 May 2021
Turn xarray timestacks into GIFs with python
13 May 2021