This repository contains python codes and datasets necessary to run the GNNGuard algorithm. GNNGuard is a general defense approach against a variety of poisoning adversarial attacks that perturb the discrete graph structure. GNNGuard can be straightforwardly incorporated into any GNN models to prevent the misclassification caused by poisoning adversarial attacks on graphs. Please see our paper for more details on the algorithm.

Deep learning methods for graphs achieve remarkable performance on many tasks. However, despite the proliferation of such methods and their success, recent findings indicate that small, unnoticeable perturbations of graph structure can catastrophically reduce performance of even the strongest and most popular Graph Neural Networks (GNNs). By integrating with the proposed GNNGuard, the GNN classifier can correctly classify the target node even under strong adversarial attacks. 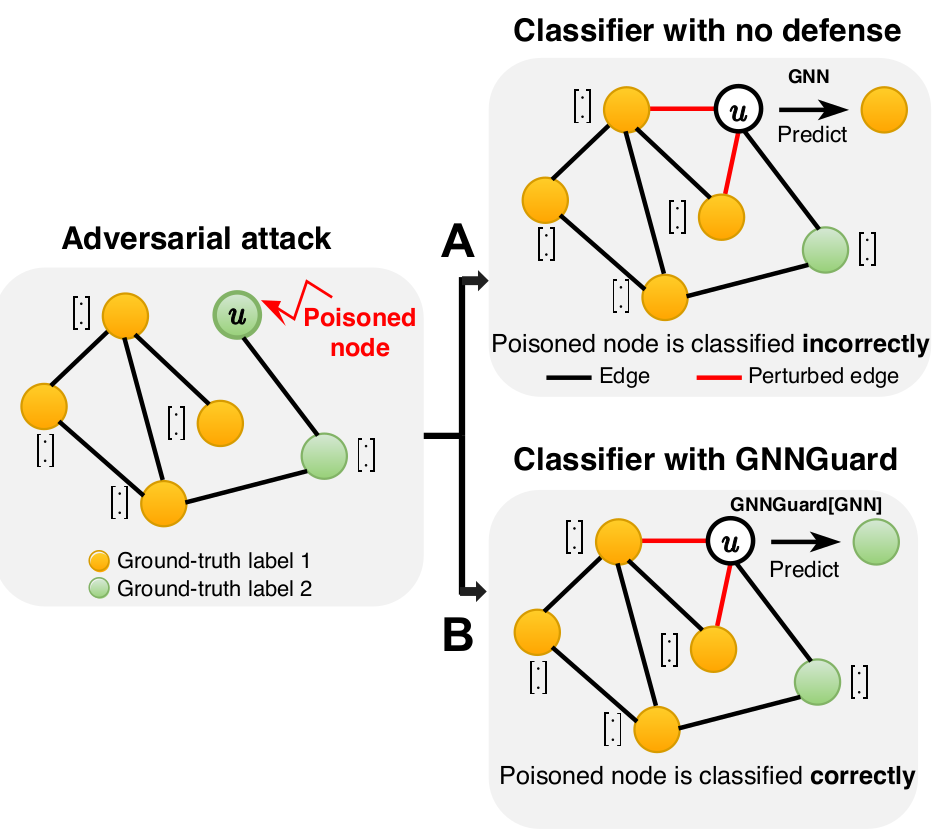 The key idea of GNNGuard is to detect and quantify the relationship between the graph structure and node features, if one exists, and then exploit that relationship to mitigate negative effects of the attack. GNNGuard learns how to best assign higher weights to edges connecting similar nodes while pruning edges between unrelated nodes. In specific, instead of the neural message passing of typical GNN (shown as A), GNNGuard (B) controls the message stream such as blocking the message from irrelevent neighbors but strengthening messages from highly-related ones. Importantly, we are the first model that can defend heterophily graphs (\eg, with structural equivalence) while all the existing defenders only considering homophily graphs.

For example, to check the performance of GCN without defense under direct targeted attack, run the following code:

Turn on the GNNGuard defense, run

If you find GNNGuard useful for your research, please consider citing this paper:

GNNGuard is tested to work under Python >=3.5.

Recent versions of Pytorch, torch-geometric, numpy, and scipy are required. All the required basic packages can be installed using the following command:
'''
pip install -r requirements.txt
'''
Note: For toch-geometric and the related dependices (e.g., cluster, scatter, sparse), the higher version may work but haven't been tested yet.

During the evaluation, the adversarial attacks on graph are performed by DeepRobust from MSU, please install it by

Note: 1). Don't forget to backup all the original files when you replacing anything, in case you need them at other places! 2). Please install the corresponding CUDA versions if you are using GPU.

Here we provide the datasets (including Cora, Citeseer, ogbn-arxiv, and DP) used in GNNGuard paper.

The ogbn-arxiv dataset can be easily access by python codes:

More details about ogbn-arxiv dataset can be found here.

Add styles from famous paintings to any photo in a fraction of a second
20 September 2021
Faster, Leaner GPU Sklearn, Statsmodels written in PyTorch
28 September 2021
This is a TensorFlow implementation of a Deep Neural Network for scenetext recognition.
02 September 2021