Notably, this package includes stochastic implementations of these models on dynamic networks.

The foundation of the models in this package is the classic SEIR model of infectious disease. The SEIR model is a standard compartmental model in which the population is divided into susceptible (S), exposed (E), infectious (I), and recovered (R) individuals. A susceptible member of the population becomes exposed (latent infection) when coming into contact with an infectious individual, and progresses to the infectious and then recovered states. In the SEIRS model, recovered individuals may become resusceptible some time after recovering (although re-susceptibility can be excluded if not applicable or desired).

The rates of transition between the states are given by the parameters:

The effect of testing for infection on the dynamics can be modeled by introducing states corresponding to detected exposed (DE) and detected infectious (DI). Exposed and infectious individuals are tested at rates θE and θI, respectively, and test positively for infection with rates ψE and ψI, respectively (the false positive rate is assumed to be zero, so susceptible individuals never test positive). Testing positive moves an individual into the appropriate detected case state, where rates of transmission, progression, recovery, and/or mortality (as well as network connectivity in the network model) may be different than those of undetected cases. 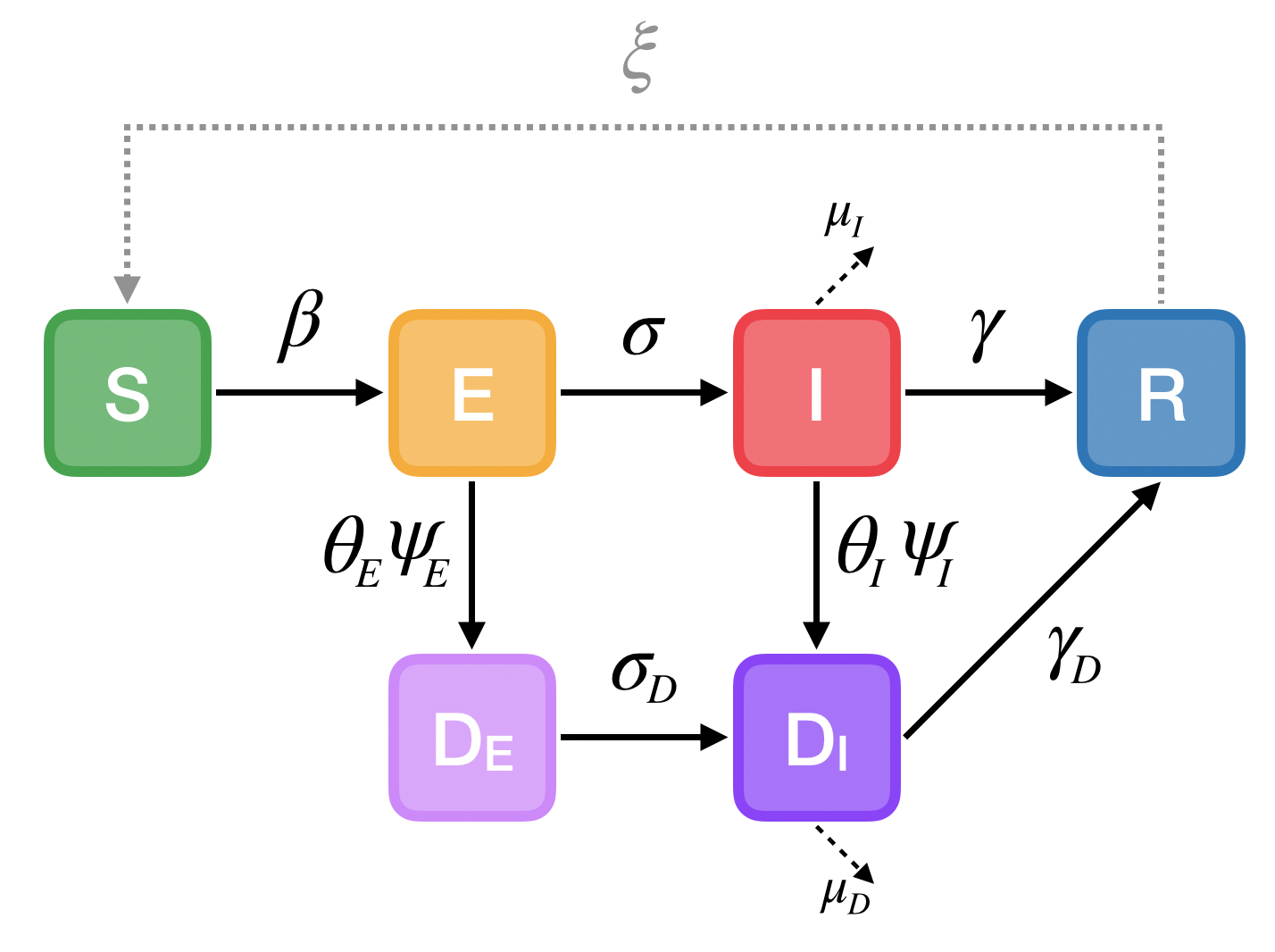 The rates of transition between the states are given by the parameters:

Vital dynamics are also supported in these models (optional, off by default), but aren't discussed in the README.

The evolution of the SEIRS dynamics described above can be described by the following systems of differential equations. Importantly, this version of the model is deterministic and assumes a uniformly-mixed population. 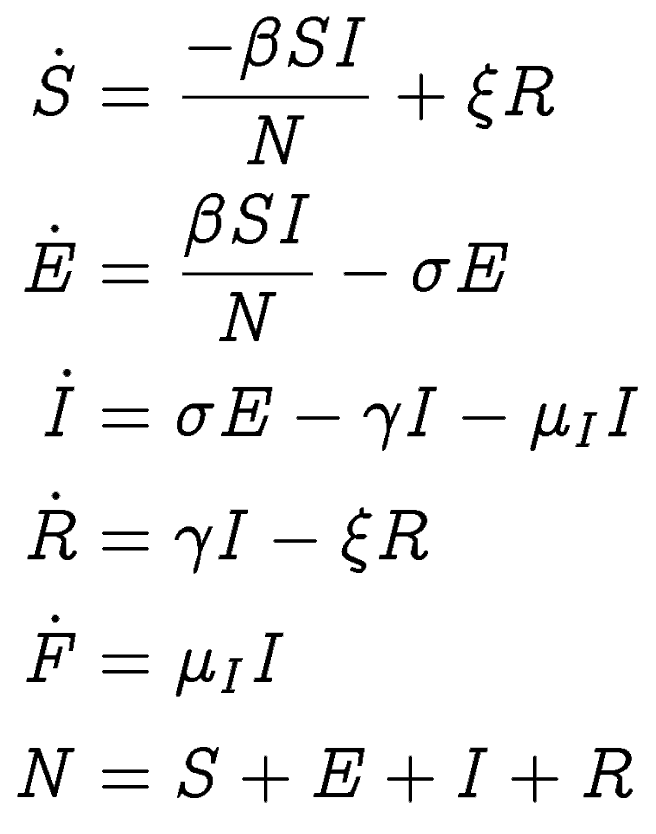 where S, E, I, R, and F are the numbers of susceptible, exposed, infectious, receovered, and deceased individuals, respectively, and N is the total number of individuals in the population (parameters are described above). 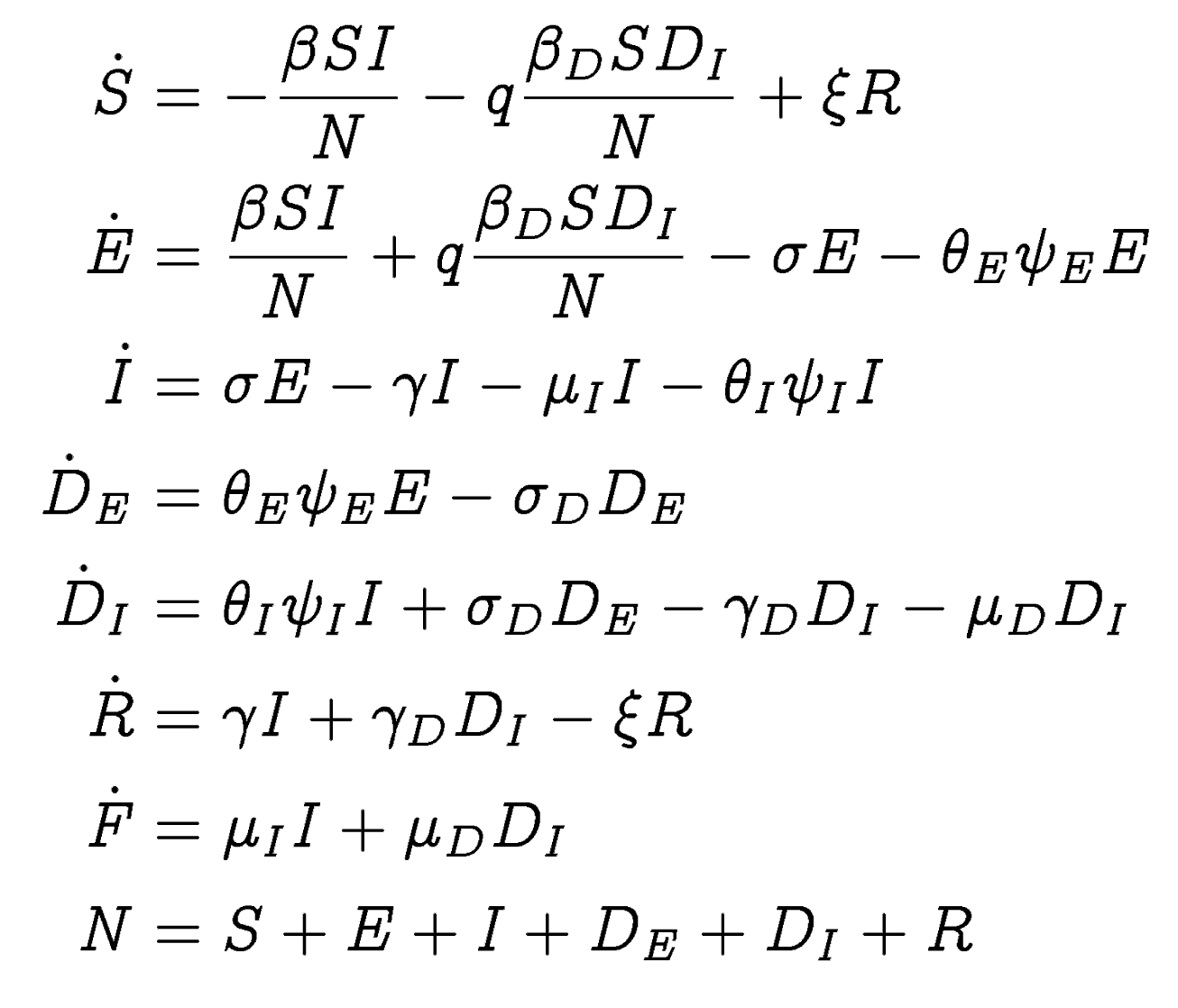 where S, E, I, DE, DI, R, and F are the numbers of susceptible, exposed, infectious, detected exposed, detected infectious, receovered, and deceased individuals, respectively, and N is the total number of individuals in the population (parameters are described above).

The standard SEIRS model captures important features of infectious disease dynamics, but it is deterministic and assumes uniform mixing of the population (every individual in the population is equally likely to interact with every other individual). However, it is often important to consider stochastic effects and the structure of contact networks when studying disease transmission and the effect of interventions such as social distancing and contact tracing.

This package includes implementation of the SEIRS dynamics on stochastic dynamical networks. This avails analysis of the realtionship between network structure and effective transmission rates, including the effect of network-based interventions such as social distancing, quarantining, and contact tracing. 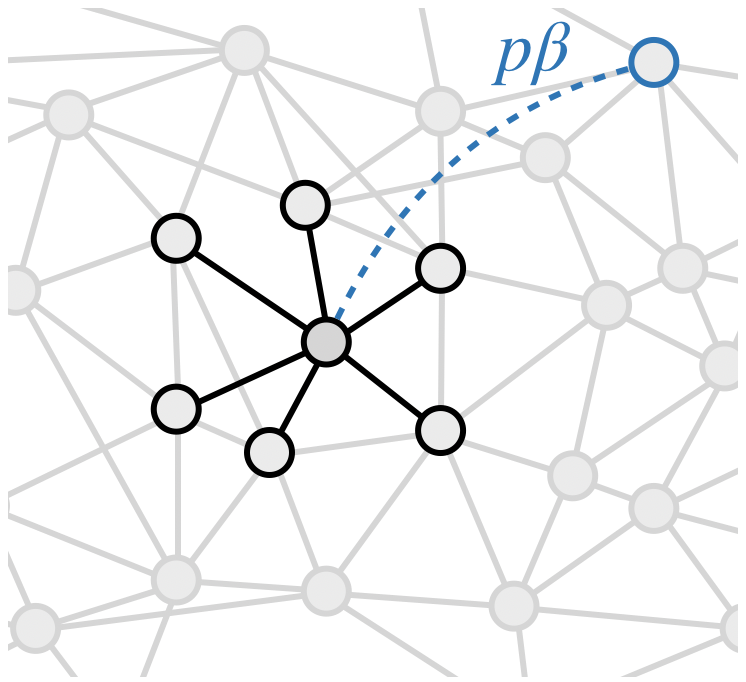 Each node i has a state Xi that updates according to the following probability transition rates:

where δXi=A = 1 if the state of X_i is A, or 0 if not, and where CG(i) denotes the set of close contacts of node i. For large populations and p=1, this stochastic model approaches the same dynamics as the deterministic SEIRS model.

This implementation builds on the work of Dottori et al. (2015).

As with the deterministic model, exposed and infectious individuals are tested at rates θE and θI, respectively, and test positively for infection with rates ψE and ψI, respectively (the false positive rate is assumed to be zero, so susceptible individuals never test positive). Testing positive moves an individual into the appropriate detected case state (DE or DI), where rates of transmission, progression, recovery, and/or mortality (as well as network connectivity in the network model) may be different than those of undetected cases.

Each node i has a state Xi that updates according to the following probability transition rates: where δXi=A=1 if the state of Xi is A, or 0 if not, and where CG(i) and CQ(i) denotes the set of close contacts and quarantine contacts of node i, respectively. For large populations and p=1, this stochastic model approaches the same dynamics as the deterministic SEIRS model (sans contact tracing, which is not included in the uniformly-mixed model).

This package was designed with broad usability in mind. Complex scenarios can be simulated with very few lines of code or, in many cases, no new coding or knowledge of python by simply modifying the parameter values in the example notebooks provided. See the Quick Start section and the rest of this documentation for more details.

Don't be fooled by the length of the README, running these models is quick and easy. The package does all the hard work for you. As an example, here's a complete script that simulates the SEIRS dyanmics on a network with social distancing, testing, contact tracing, and quarantining in only 10 lines of code (see the example notebooks for more explanation of this example):

The examples directory contains two Jupyter notebooks: one for the deterministic model and one for the network model. These notebooks walk through full simulations using each of these models with description of the steps involved.

These notebooks can also serve as ready-to-run sandboxes for trying your own simulation scenarios by simply changing the parameter values in the notebook.

Installing and Importing the Package

All of the code needed to run the model is imported from the models module of this package.

The package can be installed on your machine by entering this in the command line:

Then, the models module can be imported into your scripts as shown here:

Alternatively, manually copy the code to your machine

You can use the model code without installing a package by copying the models.py module file to a directory on your machine. In this case, the easiest way to use the module is to place your scripts in the same directory as the module, and import the module as shown here:

All model parameter values, including the normal and (optional) quarantine interaction networks, are set in the call to the SEIRSModel constructor. The basic SEIR parameters beta, sigma, gamma, and initN are the only required arguments. All other arguments represent parameters for optional extended model dynamics; these optional parameters take default values that turn off their corresponding dynamics when not provided in the constructor.

All model parameter values, including the interaction network and (optional) quarantine network, are set in the call to the SEIRSNetworkModel constructor. The interaction network G and the basic SEIR parameters beta, sigma, and gamma are the only required arguments. All other arguments represent parameters for optional extended model dynamics; these optional parameters take default values that turn off their corresponding dynamics when not provided in the constructor.

Heterogeneous populations: Nodes can be assigned different values for a given parameter by passing a list of values (with length = number of nodes) for that parameter in the constructor.

All constructor parameters are listed and described below, followed by examples of use cases for various elaborations of the model are shown below (non-exhaustive list of use cases).

Basic SEIR on a network

Basic SEIRS on a network

SEIR on a network with global interactions (p>0)

Once a model is initialized, a simulation can be run with a call to the following function:

The run() function has the following arguments

Model parameter values and the variable time series generated by the simulation are stored in the attributes of the SEIRSModel or SEIRSNetworkModel being used and can be accessed directly as follows:

Note: convenience methods for plotting these time series are included in the package. See below.

The interaction network can be specified by a networkx Graph object or a numpy 2d array representing the adjacency matrix, either of which can be defined and generated by any method.

Note: Simulation time increases with network size. Small networks simulate quickly, but have more stochastic volatility. Networks with ~10,000 are large enough to produce per-capita population dynamics that are generally consistent with those of larger networks, but small enough to simulate quickly. We recommend using networks with ~10,000 nodes for prototyping parameters and scenarios, which can then be run on larger networks if more precision is required.

Human interaction networks often resemble scale-free power law networks with exponential degree distributions.
This package includes a custom_exponential_graph() convenience funciton that generates power-law-like graphs that have degree distributions with two exponential tails. The method of generating these graphs also makes it easy to remove edges from a reference graph and decrease the degree of the network, which is useful for generating networks representing social distancing and quarantine conditions.

Common algorithms for generating power-law graphs, such as the Barabasi-Albert preferential attachment algorithm, produce graphs that have a minimum degree; that is, no node has fewer than m edges for some value of m, which is unrealistic for interaction networks. This custom_exponential_graph() function simply produces graphs with degree distributions that have a peak near their mean and exponential tails in the direction of both high and low degrees. (No claims about the realism or rigor of these graphs are made.) 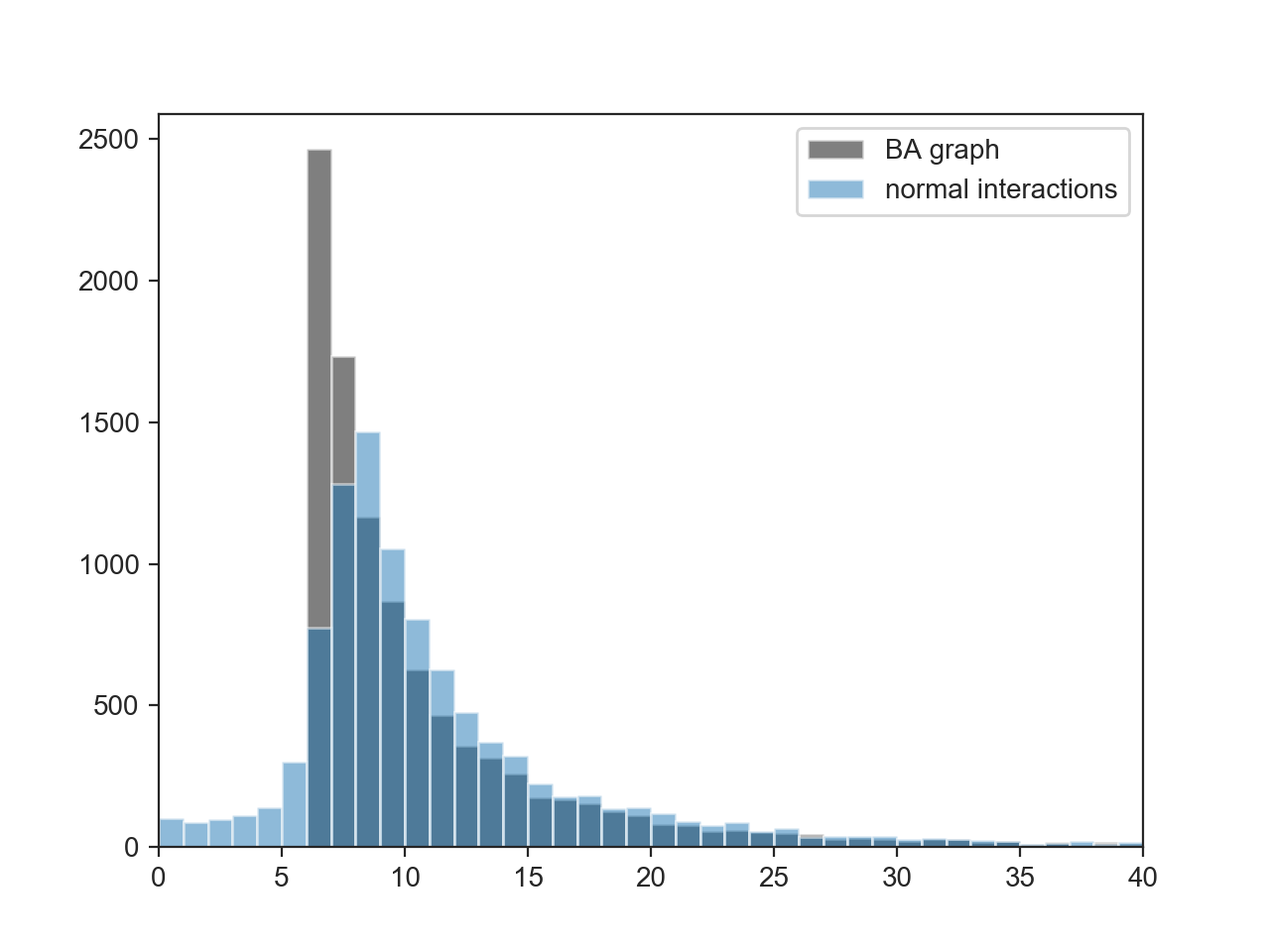 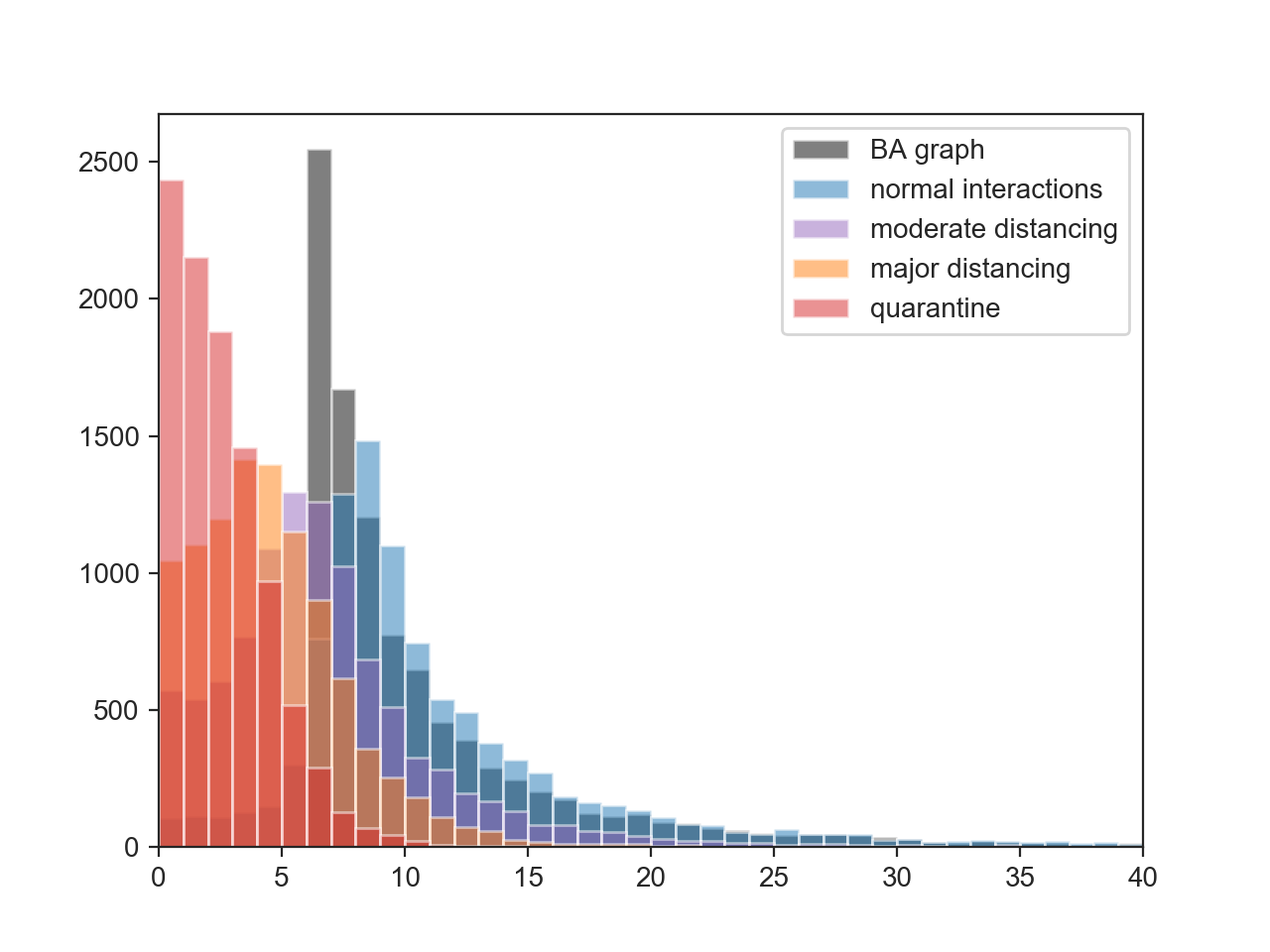 Since this algorithm starts with a graph with defined connections and makes a new graph by breaking some number of connections, it also makes it easy to take an existing graph and make a subgraph of it that also has exponential-ish tails and a left-shifted mean. This can be used for generating social distancing and quarantine subgraphs. The amount of edge breaking/degree reduction is modulated by the scale parameter. To the right are some examples of graphs with progressively lower mean degree generated using the same reference Barabasi-Albert graph, which therefore are all subsets of a common reference set of edges.

The custom_exponential_graph() function has the following arguments

Changing parameters during a simulation

Example of running a simulation with checkpoints:

Use cases of this feature include:

Consecutive runs: You can also run the same model object multiple times. Each time the run() function of a given model object is called, it starts a simulation from the state it left off in any previous simulations.
For example:

The SEIRSModel and SEIRSNetworkModel classes have a plot() convenience function for plotting simulation results on a matplotlib axis. This function generates a line plot of the frequency of each model state in the population by default, but there are many optional arguments that can be used to customize the plot.

These classes also have convenience functions for generating a full figure out of model simulation results (optionally, arguments can be provided to customize the plots generated by these functions, see below).

Parameters that can be passed to any of the above functions include: