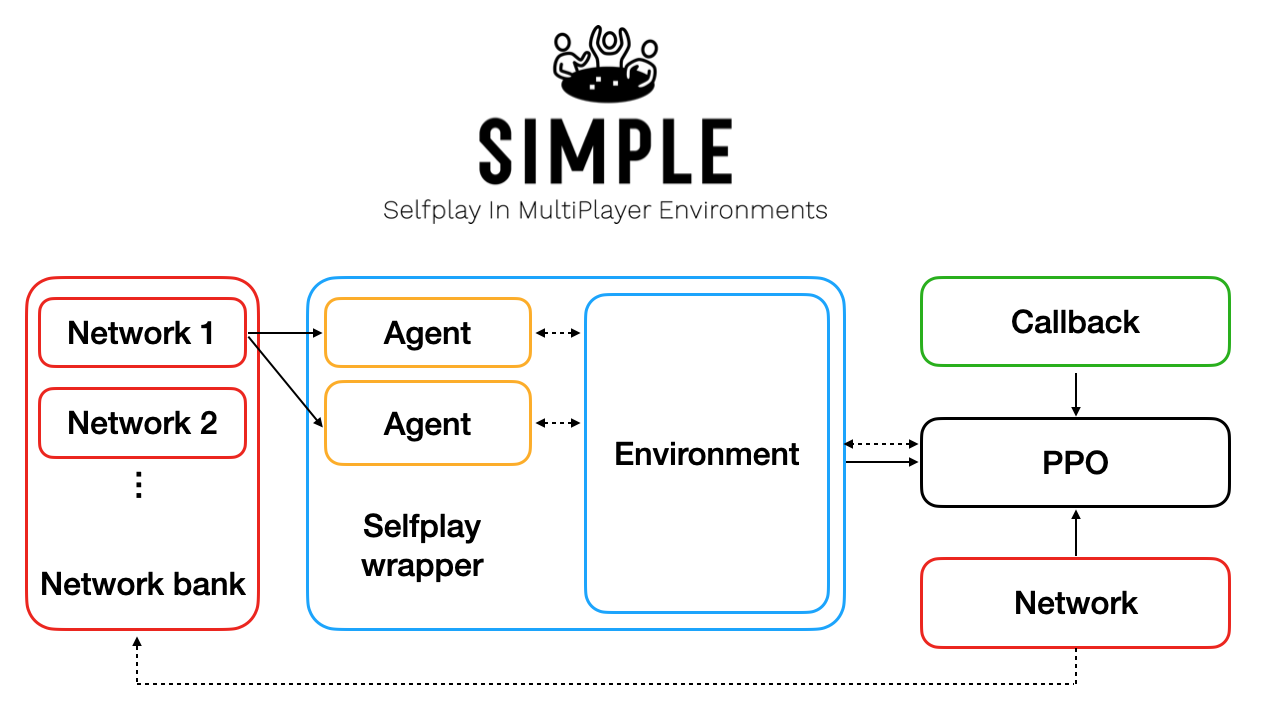 This project allows you to train AI agents on custom-built multiplayer environments, through self-play reinforcement learning.

To learn more, check out the accompanying blog post.

This guide explains how to get started with the repo, add new custom environments and tune the hyperparameters of the system.

To get a local copy up and running, follow these simple steps.

Install Docker and Docker Compose to make use of the docker-compose.yml file

This is a quick tutorial to allow you to start using the two entrypoints into the codebase: test.py and train.py.

TODO - I'll be adding more substantial documentation for both of these entrypoints in due course! For now, descriptions of each command line argument can be found at the bottom of the files themselves.

For example, try the following command to play against a baseline random model in the Sushi Go environment.

This entrypoint allows you to start training the AI using selfplay PPO. The underlying PPO engine is from the Stable Baselines package.

For example, you can start training the agent to learn how to play SushiGo with the following command:

After 30 or 40 iterations the process should have achieved above the default threshold score of 0.2 and will output a new best_model.zip to the /zoo/sushigo folder.

Training runs until you kill the process manually (e.g. with Ctrl-C), so do that now.

You can now use the test.py entrypoint to play 100 games silently between the current best_model.zip and the random baselines model as follows:

You should see that the best_model scores better than the two baseline model opponents.

You can continue training the agent by dropping the -r reset flag from the train.py entrypoint arguments - it will just pick up from where it left off.

Congratulations, you've just completed one training cycle for the game Sushi Go! The PPO agent will now have to work out a way to beat the model it has just created...

To monitor training, you can start Tensorboard with the following command:

Navigate to localhost:6006 in a browser to view the output.

For the environment to work with the SIMPLE self-play wrapper, the class must contain the following methods (expanding on the standard methods from the OpenAI Gym framework):

In the initiation method, you need to define the usual action_space and observation_space, as well as two additional variables:

The step method accepts an action from the current active player and performs the necessary steps to update the game environment. It should also it should update the current_player_num to the next player, and check to see if an end state of the game has been reached.

The reset method is called to reset the game to the starting state, ready to accept the first action.

The render function is called to output a visual or human readable summary of the current game state to the log file.

The observation function returns a numpy array that can be fed as input to the PPO policy network. It should return a numeric representation of the current game state, from the perspective of the current player, where each element of the array is in the range [-1,1].

Please refer to existing environments for examples of how to implement each method.

The training process can be parallelised using MPI across multiple cores.

For example to run 10 parallel threads that contribute games to the current iteration, you can simply run:

See the open issues for a list of proposed features (and known issues).

Any contributions you make are greatly appreciated.

Python module for performing robust linear regression on (X,Y) data points where both X and Y have measurement errors.
15 June 2021
PyTorch Implementation of Meta-StyleSpeech : Multi-Speaker Adaptive Text-to-Speech Generation.
15 June 2021
a model for learning what we are calling "neural script knowledge" -- representations about what is going on in videos
15 June 2021