The goal of this project is to create a learning based system that takes an image of a math formula and returns corresponding LaTeX code.

In order to render the math in many different fonts we use XeLaTeX, generate a PDF and finally convert it to a PNG. For the last step we need to use some third party tools:

Thanks to @katie-lim, you can use a nice user interface as a quick way to get the model prediction. Just call the GUI with python gui.py. From here you can take a screenshot and the predicted latex code is rendered using MathJax and copied to your clipboard.

If the model is unsure about the what’s in the image it might output a different prediction every time you click “Retry”. With the temperature parameter you can control this behavior (low temperature will produce the same result).

Alternatively you can use pix2tex.py with similar functionality as gui.py, only as command line tool. In this case you don’t need to install PyQt5. Using this script you can also parse already existing images from the disk.

Note: As of right now it works best with images of smaller resolution. Don’t zoom in all the way before taking a picture. Double check the result carefully. You can try to redo the prediction with an other resolution if the answer was wrong.

Update: I have trained an image classifier on randomly scaled images of the training data to predict the original size.
This model will automatically resize the custom image to best resemble the training data and thus increase performance of images found in the wild. To use this preprocessing step, all you have to do is download the second weights file mentioned above. You should be able to take bigger (or smaller) images of the formula and still get a satisfying result 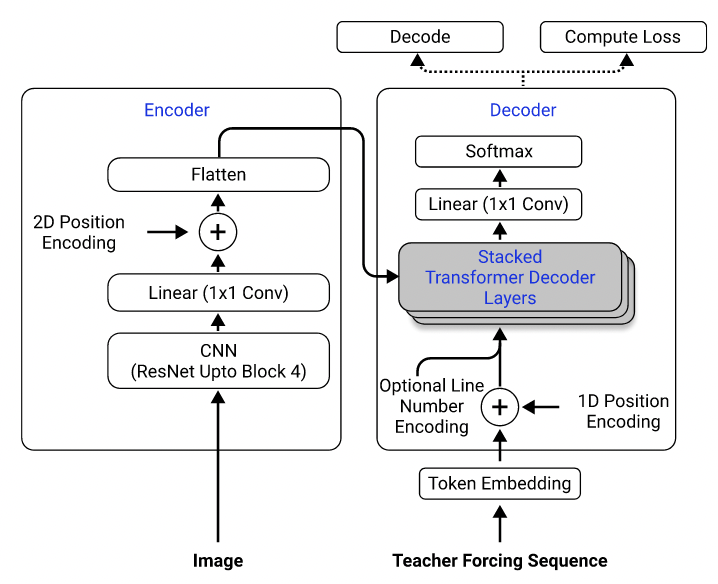 The model consist of a ViT [1] encoder with a ResNet backbone and a Transformer [2] decoder.

We need paired data for the network to learn. Luckily there is a lot of LaTeX code on the internet, e.g. wikipedia, arXiv. We also use the formulae from the I2L-140k dataset.

Contributions of any kind are welcome.

A tool to plot and execute Rossmos's Formula, that helps to catch serial criminals using mathematics
20 December 2021
A simple python script that print the Mandelbrot set for every power of the formal formula
22 November 2021
Simple RGB to HEX game made in python
11 November 2021
Converts python code into c++ by using OpenAI CODEX
04 September 2022
A Python script I use to quickly convert Google Docs articles to Markdown with frontmatter
04 September 2022
Image to wave art converter using python with the help of OpenCV & Numpy modules
13 August 2022
Python based Bloodhound data converter from the legacy pre 4.1 format to 4.1+ format
27 July 2022
Convert your epub book into the bionic reading text formatting
27 July 2022