A script to turn your Fusion360 design history timeline into an animation. When run, this script rolls your design history timeline back to the beginning and saves out screenshots as it steps through each operation in your design. For many operations (e.g. Extrudes, Revolves), it create a smooth animation by interpolating across a range of values.

This script can be configured to save at any image resolution! You can optionally add spin to the animation and change various other parameters via a small panel: 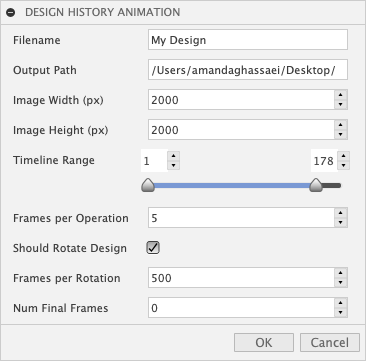 WARNING - THIS SCRIPT WILL MAKE CHANGES TO YOUR DESIGN FILE. I recommended running this script on the copy of your design so that you don't accidentally modify your file. At the very least, do not save the changes to your file - they involve unlinking references to external components for better control over the animation transitions - you probably do not want these changes.

If you like this, you should also check out Fusion360-Design-Version-Timelapse.

Download this repository as ZIP and unzip the folder (put this folder in a place where you won't delete it later):

In the Design workspace, go to the Tools tab and select Add Ins > Scripts and Add-Ins...: 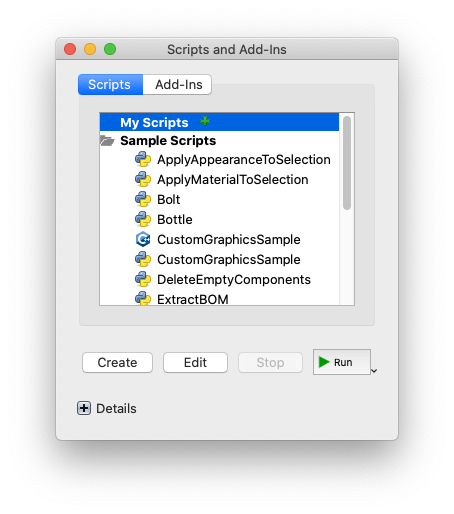 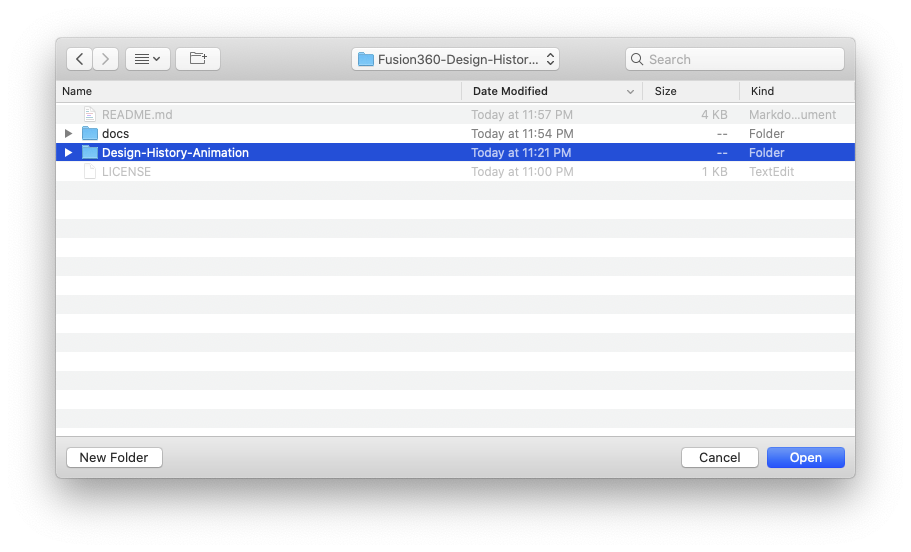 You should now see it added to your scripts. To Run the script, select it and press Run: 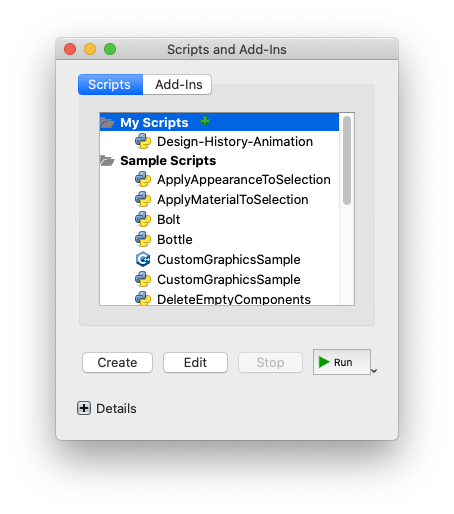 A few notes on use:

I'm hoping the rest of the parameters in the panel are self-explanatory.

After all the still frames (with the name FILENAME_###.png) are generated, I use ffmpeg to compile the stills into an animation. From the terminal run:

-r 30 sets the framerate to 30 fps
-c:v libx264 -preset slow -crf 22 encodes as h.264 with better compression settings
-pix_fmt yuv420p makes it compatible with the web browser
-an creates a video with no audio
You can optionally specify -s 640x640 to control the output size of the video
If your filename has spaces in it, you can escape them with -i PATH_TO_FRAMES/filename\ with\ spaces_%d.png

I upload the resulting video or raw frames to ezgif to create an animated gif. I'm sure many other solutions exist (e.g. Photoshop, Premiere, GIMP).

Pull requests welcome! This is a quick script I wrote for myself, and while it does a decent job at animating the most common Fusion360 operations, there is room for improvement. Some of this is due to time constraints on my end, others may be limitations of the Fusion API. Some examples of features I'd like to add: