A Math Parser for Python

This repository contains a parser for simple mathematical expressions of the form 2*(3+4) written in 116 lines of Python code. No dependencies are used except for what can be found in the Python standard library. It exists solely for educational reasons.

How to Use it

and you should receive 14 as the result.
This is perhaps not so surprising, but you can also run

to get a visual reprentation of the abstract syntax tree
(this requires having Graphviz installed). 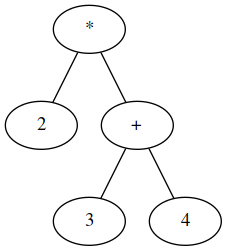 Creating a hand-written parser for anything is completely useless nowadays as there are tools like
ANTLR that perform all the heavy lifting for you.
Moreover, this particular problem must have been solved millions of times
by undergrad computer science students all around the world.
However, it has not been solved by me until this date,
as in my undergrad studies at TU Vienna we were skipping the low-level work
and built a parser based on yacc/bison.
I really enjoyed doing this small side project
because it takes you back to the roots of computer science
(this stuff dates back to 1969, according to Wikipedia)
and I like a lot how you end up with a beautiful and simple solution.

Be aware that I am by no means an expert in compiler construction
and someone who is would probably shudder at some of the things happening here,
but to me it was a nice educational exercise.

The literature regarding this topic is very formal,
which makes it a bit hard to get into the topic for an uninitiated person.
In this description, I have tried to focus more on intuitive explanations.
However, to me it is quite clear that if you don't stick to the theory,
then you will soon run into things that are hard to make sense of
if you cannot connect it to what's going on in the literature.

The problem is to bring algebraic expressions represented as a string
into a form that can be easily reused for doing something interesting with it,
such as computing the result of the expression or visualizing it nicely.
The allowed algebraic operations are +,-,*,/ as well as using (nested) parentheses ( ... ).
The standard rules for operator precedence apply.

There are different ways how this problem can be tackled,
but in general LL(1) parsers have a reputation for being very simple to implement.

An LL(1) parser is a top-down parser that keeps replacing elements on the parser stack
with the right-hand side of the currently matching grammar rule.
This decision is based on two pieces of information:

For example, if the current symbol on the stack is S and the current input terminal is a
and there is a rule in the grammar that allows

then S should be replaced with a P.
Here, S and P are non-terminals, and for the remainder of this document,
capitalized grammar elements are considered non-terminals,
and lower-case grammar elements, such as a are considered a terminal.
To continue the example, a on top of the stack is now matched to the input stream terminal a
and removed from the stack.
The process continues until the stack is empty (which means the parsing was successful)
or an error occurs (which means that input stream doesn't conform to the grammar).

As there are usually multiple grammar rules to choose from, the information which rule to apply
in which situation needs to be encoded somehow and is typically stored in a parsing table.
In our case however the grammar is so simple that this would almost be an overkill and so instead
the parsing table is represented by some if-statements throughout the code.

Here is the starting point for our grammar:

The grammar is rather self-explanatory.
It is however ambiguous, because it contains a rule of the form NtN.
This means that it is not defined yet whether 2+3*4 should be interpreted
as 2+3=5 followed by 5*4=20 or as 3*4=12 followed by 2+12=14.
By cleverly re-writing the grammar, the operator precedence can be encoded in the grammar.

For the previous example 2+3*4 the following derivations would be used from now on:

Compare this to the derivation of 3*4+2

We see that in both examples the order in which the rules for the operators
+ and * are applied is the same.
It is perhaps slightly confusing that + appears first,
but if you look at the resulting parse tree you can convince yourself that
the result of * flows as an input to + and therefore it needs to be computed first.

Here, I used a left-most derivation of the input stream.
This means that you would always try to replace the left-most symbol next
(which corresponds to the symbol on the top of the stack),
and not something in the middle of your parse tree.
This is what one L in LL(1) actually stands for, so this is also how our parser will operate.

However, there is one more catch.
The grammar we came up with is now non-ambiguous, but still it cannot be parsed by an LL(1) parser,
because multiple rules start with the same non-terminal
and the parser would need to look ahead more than one token to figure out which rule to apply.
Indeed, for the example above you have to look ahead more than one rule
to figure out the derivation yourself.
As the 1 in LL(1) indicates, LL(1)-parsers only look ahead one symbol.
Luckily, one can make the grammar LL(1)-parser-friendly by rewriting all the left recursions
in the grammar rules as right recursions.

Here, ϵ means that the current symbol of the stack should be just popped off,
but not be replaced by anything else.

Also, we added another rule (0) that makes sure
that the parser understands when the input is finished.
Here, $ stands for end of input.

While we are not going to use an explicit parsing table, we still need to know its contents
so that the parser can determine which rule to apply next.
To simplify the contents of the parsing table, I will use one little trick that I discovered
while implementing the whole thing and that is:

If there is only one grammar rule for a particular non-terminal,
just expand it without caring about what is on the input stream.

This is a bit different from what you find in the literature,
where you are instructed to only expand non-terminals if the current terminal permits it.
In our case, this means that the non-terminals S, Exp and Exp2 will be expanded no matter what.

For the other non-terminals, it is quite clear which rule to apply:

Since we also have some rules that can be expanded to ϵ,
we need to figure out when that should actually happen.
For this it is necessary to look at what terminal appears after a nullable non-terminal.
The nullable non-terminals in our case are Exp' and Exp2'.
Exp' is followed by ) and $ and Exp2 is followed by +, -, ) and $.
So whenever we encounter ) or $ in the input stream while Exp' is on top of the stack,
we just pop Exp' off and move on.

A nice thing about LL(1) parsing is that you can just use the call stack for keeping track
of the current non-terminal.
So in the Python implementation, you will find for the non-terminal Exp a function parse_e()
that does not much else than first calling parse_e2() and then calling parse_ea (which corresponds to Exp').

A look at the function parse_e3() shows us how to handle terminals:

Here, it is checked whether the current token from the input stream is a number.
If it is, we consume the input token directly without putting it on some intermediate stack.
This corresponds to rule (7).
If it is not a number, it must be a (, so we try to consume this instead
(the function match() raises an exception if the expected and the incoming tokens are different).

The abstract syntax tree (AST) can be constructed on the fly during parsing.
The trick here is to only include those elements that are interesting
(in our case num, +, -, *, / and skip over all the elements that are
only there for grammatical reasons.

One thing you might find worthwile to try is to start with the concrete syntax tree
that includes all the elements of the grammar and kick out things that you find are useless.
Keeping things visualized definitely helps with this.

All of the standard math operators are left-associative,
meaning that 3+2+1 should be interpreted as ((3+2)+1).
For addition, getting this right is not super-crucial, as additions anyway are commutative.
However, once you start playing around with subtractions (or divisions), this becomes really important,
as you definitely want 3-2-1 to evaluate to 0 and not to (3-(2-1))=2.
Indeed, this is something that I overlooked in the first version.

This is the default AST, implementing right-associativity.
You can recreate this behaviour and also the picture by going back to commit 14e9b79. 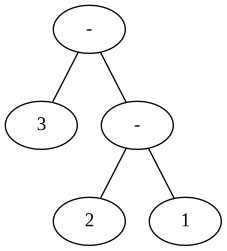 This is the desired AST, implementing left-associativity. 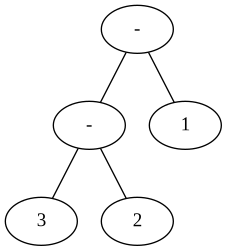 How can we now implement left-associativity?
The key insight here is that something needs to be done whenever you have two
operators of the same precedence level in a row.
So whenever we parse a - or + operation and the right child
of that operation is also a - or +,
then we just shuffle the tree around, as best explained by looking at the actual code:

The same needs to be done for * and /.
So in some sense we cheated a little because we didn't solve left-associativity in LL(1)-parsing,
but we rectified the situation directly in the AST.