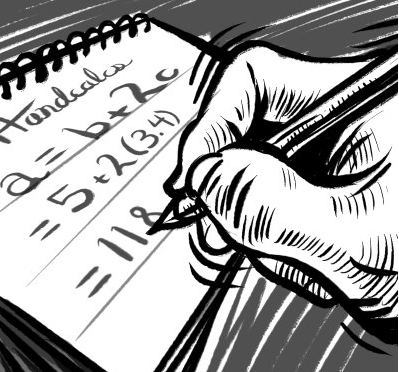 handcalcs is a library to render Python calculation code automatically in Latex, but in a manner that mimics how one might format their calculation if it were written with a pencil: write the symbolic formula, followed by numeric substitutions, and then the result.

Because handcalcs shows the numeric substitution, the calculations become significantly easier to check and verify by hand.

You can install using pip:

handcalcs is intended to be used with either Jupyter Notebook or Jupyter Lab as a cell magic.

First, import the module and run the cell:

Then, in any cell that you want to render with handcalcs, just use the render cell magic at the top of your cell:

Once rendered, you can then export your notebook as a PDF, provided you have a Latex environment installed on your system. If you are new to working with Latex and would like to install it on your system so you can use this functionality, please see the section Installing Tex, in the wiki.

Basic Usage 2: As a decorator on your functions, @handcalc()

Start by importing the @handcalc() decorator:

Returns a tuple consisting of (latex_code: str, locals: dict), where locals is a dictionary of all variables in the scope of the function namespace.

In your decorated function, everything between def my_calc(...) and return locals() is now like the code in a Jupyter cell, except it's a standard Python function.

Used in this way, you can use @handcalc() to dynamically generate Latex code for display in Jupyter and non-Jupypter Python environments (e.g. streamlit).

handcalcs makes certain assumptions about how you would like your calculation formatted and does not allow for a great deal of customization in this regard. However, there are currently three customizations you can make using # comment tags as the first line of your cell after the %%render cell magic. You can only use one comment tag per cell.

Comment tags can be used with both the Jupyter cell magic and the function decorator. To use a comment tag with the decorator, the comment tag must be the first line after the signature (i.e. the def func_name():)

handcalcs renders lines of code vertically, one after the other. However, when you are assigning variables, or displaying resulting variables, you may not want to waste all of that vertical space.

Using the # Parameters comment tag, your list of parameters will instead render in three columns, thereby saving vertical space.

To save vertical space, handcalcs attempts to figure out how long your calculation is and, if it is short enough, renders it out fully on one line.

If handcalcs's internal test deems the calculation as being too long to fit onto one line, it breaks it out into multiple lines.

Use the # Long or # Short comment tags to override the length check and display the calculation in the "Long" format or the "Short" format for all calculations in the cell. e.g.

The primary purpose of handcalcs is to render the full calculation with the numeric substitution. This allows for easy traceability and verification of the calculation.

Alternatively, you may prefer to render out all of input parameters in one cell, your formulae symbolically in the following cell, and then all the final values in the last cell, skipping the numeric substitution process entirely.

Keep in mind that even if you use the # Symbolic tag with your calculations, you still need to declare those variables (by assigning values to them) ahead of time in order for your calculation to be valid Python.

For potential compatibility with other units packages, please see the wiki.

Quickly display the values of many variables

In Python, displaying the value of many variables often requires tediously typing them all into a series of print() statements. handcalcs makes this much easier:

Get Just the Latex Code, without the render

If you just want to generate the rendered Latex code directly to use in your own Latex files, you can use the %%tex cell magic instead:

Then you can just copy and paste the result into your own LaTeX document.

Subscripts in variable names are automatically created when _ is used in the variable name. Sub-subscripts are nested for each separate _ used in series.

Any variable name that contains a Greek letter (e.g. "pi", "upsilon", "eta", etc.) as a string or substring will be replaced by the appropriate Latex code to represent that Greek letter.

If you are using Python functions in your calculation, eg. min() or tan(), they will be replaced with Latex code to represent that function in Latex.

If you are creating your own functions, then they will be rendered in Latex as a custom operator.

If you are using a function with the name sqrt (whether your own custom implementation or from math.sqrt), then it will be rendered as the radical sign.

Any comments placed after a line of calculation will be rendered as an inline comment in the Latex.

This makes it convenient to make notes along side your calculations to briefly explain where you may have acquired or derived a particular value.

Any calculation entirely wrapped in parentheses, (), will be rendered as just param = result, without the substitution.

This can be convient when you want to calculate a parameter on the fly and not have it be the focus of the calculation.

Many calculations in the "real world" are dependent on context.

handcalcs allows for the inclusion of some simple conditional statements into its code in a way that makes it easier to understand the context of the calculation.

Note: Multiple "lines" of calculations can be used after the conditional expression provided that they are all on the same line and separated with ";". See Expected Behaviours for more context.

You can use scipy.quad to perform numeric integration on a pre-defined function and have handcalcs perform a basic rendering of it.

This behaviour is triggered if you use a function with either integrate or quad in the name.

Jupyter Notebooks/Lab are able to print notebooks to PDF through two methods. Both can produce great results with handcalcs:

PDF notebooks made with handcalcs tend to look better if the code input cells are suppressed. To make this convenient, handcalcs ships with two modified nbconvert template files that can be installed by running a function in Jupyter before exporting.

swap_in: the name of the handcalcs template file you wish to install. When not provided, the function will print a list of available templates whose names are acceptable inputs for this argument.

swap_out: the name of the nbconvert template file you wish to replace (default file is nbconvert's default html or latex template, respectively)

restore: when set to True, the function will remove your previously installed template file and restore the default nbconvert template.

While there are methods for manually changing the template that nbconvert uses, this has to be performed on the command line as a separate conversion step. This default template override approach is not available from within the Jupyter GUI interface.

I have found that the easiest and most reliable way to quickly change the default export behaviour is to swap out and replace the default template files. By using this approach, you can export your notebooks directly from the Jupyter GUI menu options and have your notebooks look how you wish without fussing with multiple configuration settings that may or may not take.

When handcalcs installs these templates, they make a semi-permanent change to your templates that will persist for all of your other notebooks that you print from with Jupyter, regardless of whether you are working with handcalcs or not. It does this because it is "physically" swapping out and replacing your nbconvert default template files for your local installation meaning it will persist past the end of your Jupyter session.

In this way, handcalcs can fully manage these template installations for you. However, if you manually alter the file names of an installed handcalcs template in the nbconvert templates directory, there is no guarantee that your original template can be successfully restored.

You can perform the same below process using either install_html or install_latex functions.

Given that, handcalcs only renders a small subset of Python and there is a lot that will not work, especially anything that happens over multiple lines (e.g. function definitions, for loops, with statements, etc.).

handcalcs works by parsing individual lines of Python within a cell. It does not parse the cell as a whole. Therefore all statements to be rendered must be contained on a single line.

handcalcs will make an attempt to render all datatypes. However it is not intended for "collections"-based types (e.g. list, tuple, dict, etc.)

Objects are rendered into Latex by two main approaches:

If you are using object types which have str methods that render as <MyObject: value=34>, then that's what the Latex interpreter will see and attempt to render.

Currently // is not rendered but you can easily use math.floor as a function instead.

Brackets are used to remove ambiguity in how the Latex is rendered. For example:

Here, brackets are used to define both numerator and denominator, unambiguously.

However, even though it is correct and valid Python, the below will produce unexpected results:

Under-the-hood, parsed Python code in handcalcs is represented as a nested deque: every set of parentheses (no matter the context) begins a new nested deque which is recursively converted to Latex code.

To render the fraction properly, a lookahead is performed and the next item after the / is rendered as the denominator. In this instance, the next item is the function name, sqrt, and not the full expression.

Bracketing the entire denominator causes handcalcs to see the whole expression (as a nested deque) in the lookahead.

If you have Latex output that does not look quite right, check to see if you are using brackets and fractions in this unambiguous manner.

All actual calculations are handled by Jupyter when the cell is run. The resulting values are stored in the user's namespace dictionary and handcalcs uses the variable's corresponding value from the namespace dict as the result to display. Consequently, even if the representation of your calculation seems odd, the result will be correct provided that you are using a unique variable name. (see, Gotchas)

for loops and other iterations

Showing rendered iterations is not supported. The intention for use is that you perform your iterations in a cell that is not rendered and then, once the iteration has produced the desired resulting value, you render the result in a separate cell.

Because handcalcs is designed for use within the Jupyter environment, and because Jupyter cells can be run out of order, there exists the possibility of having a big mess of beautifully rendered but completely incorrect calculations if you re-use variable names throughout your notebook.

handcalcs uses the notebook's user namespace dictionary to look up values for all variables in the namespace. If your calculations are re-using variable names throughout the notebook, then the dictionary entry for that name may not be what you think it is when you run cells out of the order originally intended.

You can re-use variable names to good effect throughout a notebook, IFF the cells are run in the correct order (easier if this is just top to bottom).

On this note: if you are using handcalcs for any kind of reporting that may become a legal document (e.g. design engineering calculations), it is up to YOU to ensure that the results are what you expect them to be. handcalcs is free and open-source software and the author(s) are not responsible for incorrect calculations that result from its use.

That being said, the very purpose for the way handcalcs renders its math is to make it very easy to confirm and verify calculations by hand.