This is a Python library allowing using a text-terminal as a low-resolution graphics output, along with keyboard realtime reading, and a couple utilities enough to enable using a text terminal to run simple 2D games or simply rich terminal apps.

The "noveau" factor is that it uses Unicode quarter-character block combinations to effectivelly enable 1/4 character "pixels" in the terminal. It also makes use of 24bit "true" color for text, not limiting itself to the 80's 8 color palette for the terminal.

It is designed as a library, providing a discoverable and easy to use API for drawing, and upon install a few example scripts will be imediately available as stand-alone scripts with the "terminedia-" prefix.

The idea is to keep this as a lightweight install - with as little dependencies as possible.

Although targeted for programatic use, after install a few example programs exercising the library capabilities are made available in the active Python environment. Try one of several "terminedia-xxxxx" scripts installed, such as "terminedia-image" and "terminedia-snake"

Some of the features are as easy to use as the print function from Python itself:

Other, like the drawing API which emulates pixels with unicode block characters require a couple more calls: 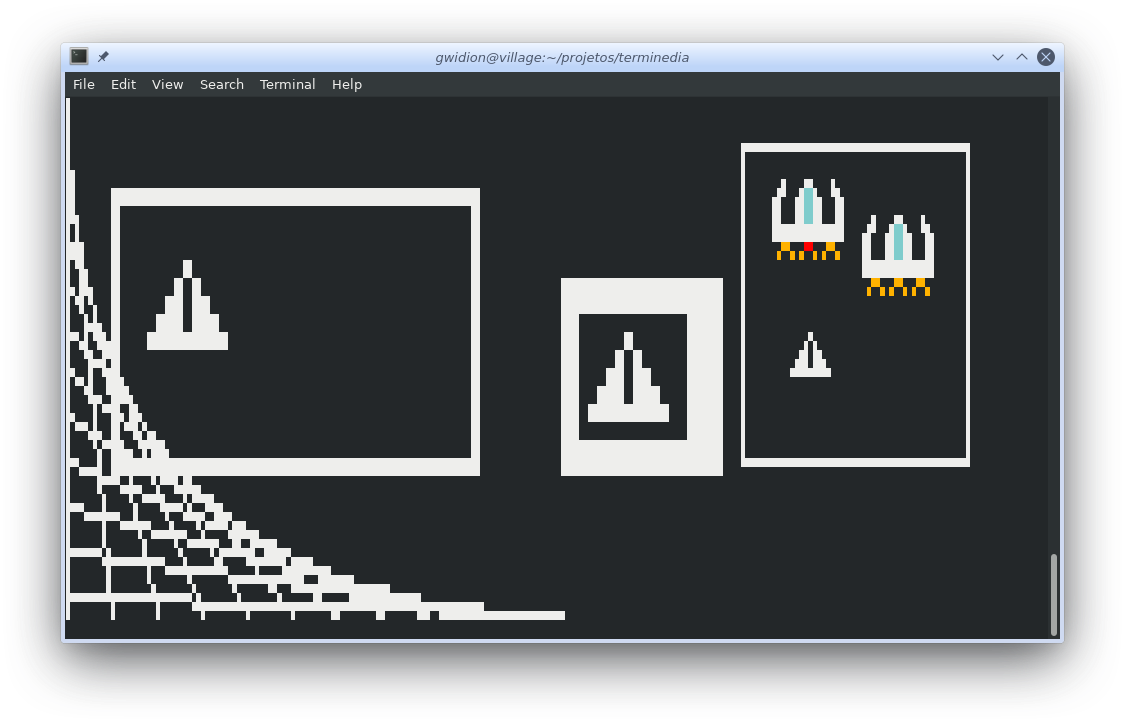 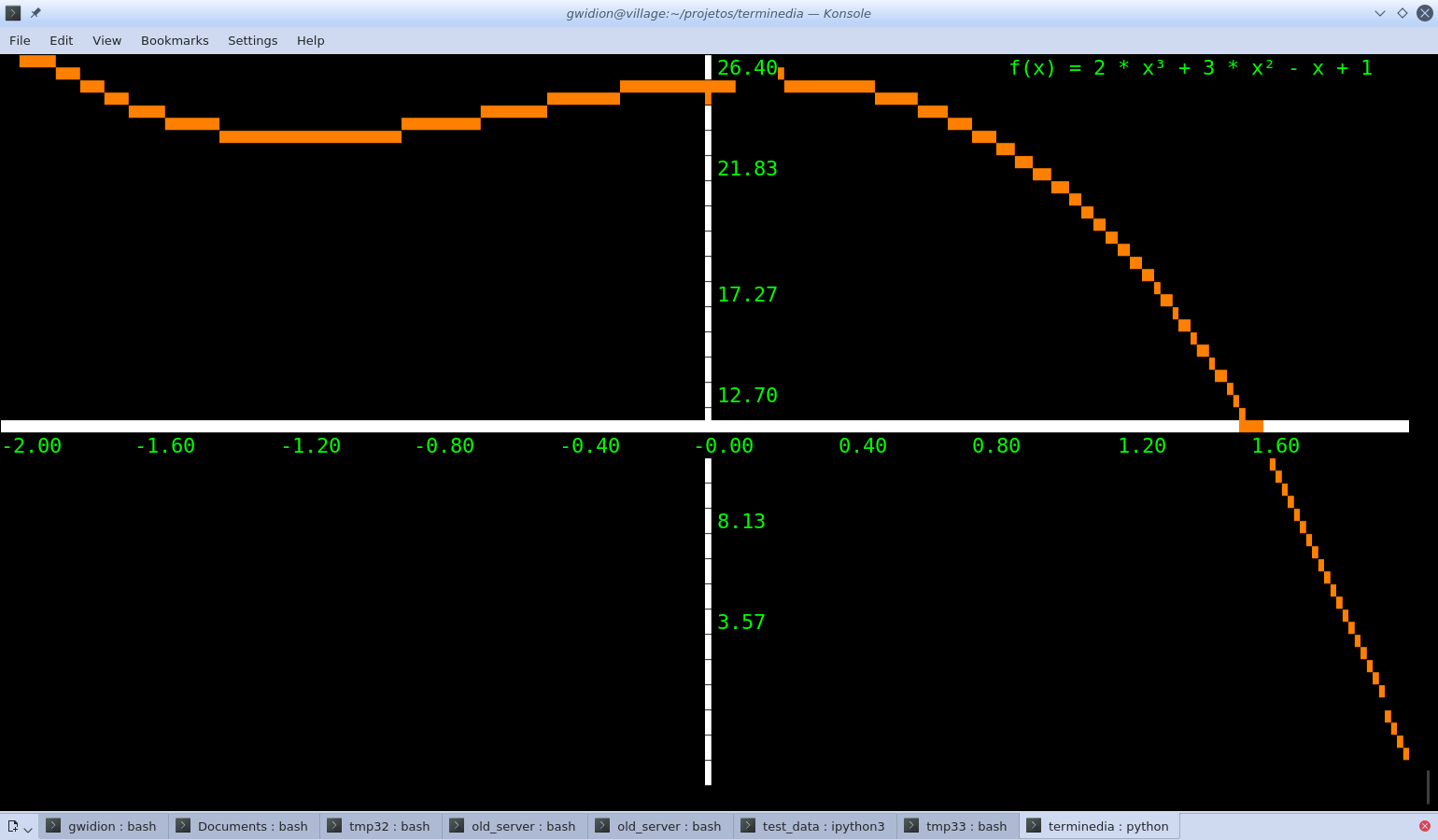 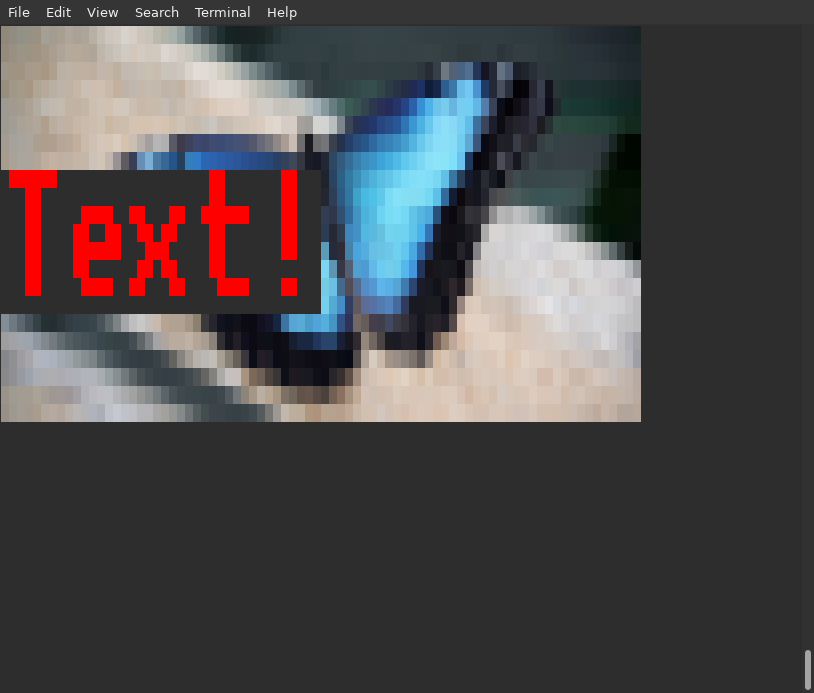 Check the in progress documentation at: https://terminedia.readthedocs.io/en/latest/

(nb. that documentation is currently for the 0.2 version, available from pypi. The project's capabilities evolved far beyond whats is in there, but docs are still missing - the "TODO.txt" file lists implemented features or fixes (marked with a "V") and a loose roadmap. Although for useage and documentation one has to rely on the doc-strings)

Also, the examples folder have concrete snippets and some stress-testing code. The examples were moved into the main package code, and granted stand-alone scripts status when the package is pip-installed.

After install, try calling any of the "terminedia-" scripts made available to check the output.

Although incipient in options, some of these example scripts can work as command line tools. For example terminedia-image <image_file> will downscale and display an image file in the terminal.

Preliminary Windows support - by using the Colorama Python package, with proper fonts configuration on the terminal, it is possible to experiment most of terminedia´s capabilities (the terminedia-snake example works). There is still work to be done, but for a better experience under Windows install the CMDER console emulator and the UNSCII fonts for rendering pseudographics (links in the FRIENDS.md file)

On Linux and other posix systems, Terminedia relies on ANSI scape sequences for all terminal manipulation. It should work in most Linux and Mac OS terminal applications (including non-X11, "native" terminals on Linux)

The output result will vary according to the terminal and font used - a nice experience can be achieved with the "Terminus" font, specially if one is using the Braille characters for drawing.

There is also an HTML backend that can output programatically created ASCII art to an HTML file, formatted with mono-spaced fonts inside a div element. The "terminedia-image" example program makes use of this feature.

A Fast, Extensible Progress Bar for Python and CLI.
14 May 2021
an an end-to-end MLOps platform that enables individuals and organizations to quickly develop, train, and deploy Deep Learning models.
12 May 2021
Command-line tool to deduplicate mails from a set of boxes.
09 May 2021