Selfhosted API Scraper for pulling Vehicle Telemetry from the Tesla Owner API into an InfluxDB visualisation on Grafana Dashboards.

Putting an end to handing out the Key for your 100+ Grand Car to a third party you don't know.

This can be hosted on any System that's capable of running InfluxDB, Grafana and Python. In this short guide I assume you're using a Debian'ish OS. It can run on a dedicated Linuxserver out there on the Internets or on your home Raspberry Pi.

The App is available on here on Google Play 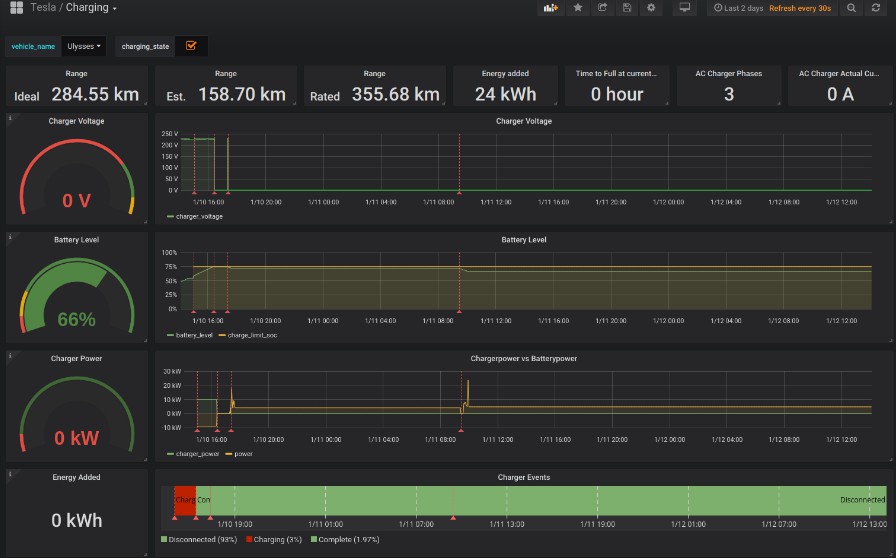 Additionally I suggest you to setup authentication or close the InfluxDB Port with a Packetfileter of your choice, if the Machine you use for Scraping has a Internetfacing Interface.

Note to the US-Users: Since the API reports all Range Values in Miles, i included two dashboard variables to match your preferences. By default the Conversion to km / kph is done, to get rid of this go to the dashboard settings:

Set Tesla and Influxdb Credentials there.

Once you know everything is running fine you can start the scraper to keep running with screen or tmux, or feel free to write down a systemd service definition file.

Alternatively, you can build and run tesla-apiscraper via Docker.

Using the API for the Scraper App for android

There's a little Android App, that can help you letting your car sleep and immidiately turn on scraping when needed. You need to uncomment and configure the follwing Values for it in config.py:

I strongly recommend to put all this behind a reverse Proxy, probably with HTTP Basic authentication in addition to the API Key.

Some remarks about the Owner APIScraper