Some ideas and tools to develop Python 3.8 plugins for GIMP 2.99.4. GIMP 2.99.4 is a unstable pre-release of GIMP 3.
It suppots Python 3, however it's documentation is rather poor, this is why I have been playing around to configure
a setup to develope GIMP plugins based on Python. This aims to bring pip and related tools into the GIMP environment.

Also, a GIMP plugin must run inside GIMP... So, let's hack to have a proper developing environment!

GIMP 2.99.4 comes with pre-compiled binaries in a flatpak distribution. So, first of all if you don't have flatpak, assuming you are on a Debian-based
Linux distro:

Flatpak is a distribution system, like Apt, but focused on end-user applications and isolation. Like Docker, it isolates the compiled application
in its own Sandbox, however it is not actually virtualized. Let's install GIMP 2.99.4:

:warning: Note: There is a problem with the 2.99.6 release involving matplotlib and cairo install in
the flatpak distribution. It will be addressed on the future. Thus, the commit of the flatpak GIMP where
version 2.99.4 was released will be pinned.

Say yes to permissions, etc. Then you will be able to run GIMP from flatpak:

Understanding which Python is using GIMP

GIMP is using a sandboxed Python distribution inside its flatpak distribution. This is a tricky way to finally
achieve a separate Python distribution for GIMP. If you start GIMP and go to the menu entry
Filters > Development > Python-Fu > Python Console a window will be prompt with a Python console that will say:

If you want to access the Python Console directly from your terminal emulator, you can run:

Although this is possible, you have to remember that GIMP plugins have to run inside GIMP. This is because are
based upon libraries importer using the gi.repository API that are only present when we are running inside GIMP.

If you want to set up a development environment for Python plugins you will need to install some tools, for example
pip package manager and a debugger. To do so, a GIMP Python plugin has been developed which prepares the environment. 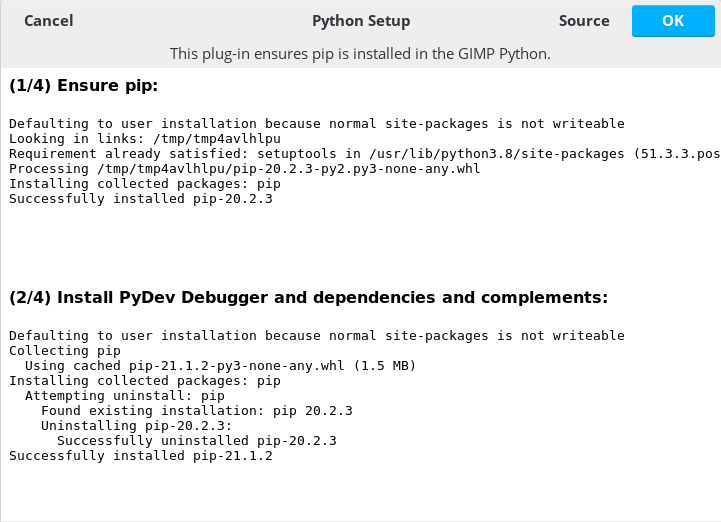