Pi-Hole is great. It blocks ads and tracking at a DNS level, and is still surprisingly effective many years after it was first introduced. However, home networks often lack some tools that would truly make Pi-Hole great.

Higher-end hardware can absolutely do a lot of this, but most home hardware cannot. Fortunately, with Pi-Hole and a couple of extra bits of software, your lowly Raspberry Pi can do all of this! Here is a video showing the DNS force-to-PiHole in action: https://www.youtube.com/watch?v=oG5o5yc3M2Q

If you're feeling adventurous, I detail herein how I rebuilt my entire home network with a Pi-Hole truly in the middle. You can do the same, with some time and patience!

Before you get started, there are a couple of things to keep in mind

1. Have your modem running in it's normal "router" mode with a working internet connection.

2. Image an SD card with Raspberry Pi OS Lite (https://www.raspberrypi.org/software/operating-systems/) and put it in the Pi.

3. Put your wireless router into AP mode. From here on, I'm going to call this your "AP" to avoid confusion. Configure the Wi-Fi network as desired on the AP (SSID, Security, Channel, etc). Also configure a static IP on it:

4. Turn off the WiFi broadcast on your modem (if any)

5. Connect the USB Ethernet port to the Pi and plug an ethernet cord from it into the WAN port of the AP

6. Plug an ethernet cord from your modem into the onboard ethernet port.

At this point, your Modem, Pi, and AP should be connected like this: 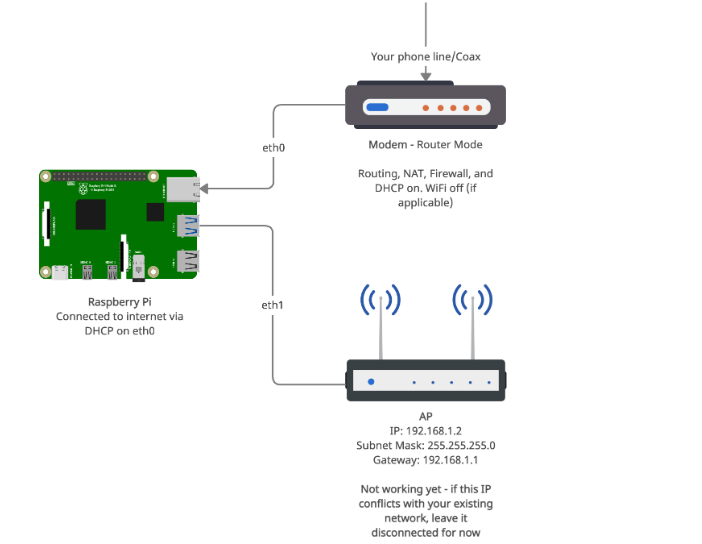 9. Do a typical Pi-Hole installation as instructed at https://github.com/pi-hole/pi-hole/#one-step-automated-install. Choose eth0 as the interface you're using (Onboard Ethernet). Set a static IP when prompted; just use the current one for now. This will be changing later. Use IPv4 only for now; we'll get to IPv6 later. Set everything else in the Pi-Hole setup however you want.

10. Test Pi-Hole and make sure it's working as-is (eg. use dig or nslookup to query a record from it)

From here on, we're turning your network upside down! Make sure you won't need the internet for a while in case everything goes south.

11. Put your modem into bridged mode. This makes it so that the modem doesn't do any routing/DHCP/etc, and passes it off to another device instead. Each modem is different, so look this up how to do this in your modem's manual.

12. Edit /etc/dhcpcd.conf on the Pi. Scroll down until you see the configs for "interface eth0" and "interface eth1" (eth1 may not be there). Comment them out and replace it with the following:

I'm not setting a static IP for eth0 (the modem), so it's going to aquire an IP via DHCP. That's because my ISP, XFinity, uses DHCP to issue IPs. That's good enough for my needs! Note that not all ISPs hand out IPs with DHCP. Some require something more complex, like PPPoE. This isn't necessarily a roadblock and can be configured to work - I did it before at an old residence with pppoeconf. However, it's more complicated and won't be discussed here.

13. Edit /etc/iptables/rules.4 on the Pi to match this file here. There's a lot going on here, so let's break it down a bit

The *nat section has 3 rules of interest.

The *filter section protects you

14. Edit /etc/sysctl.conf. Look for the line that has net.ipv4.ip_forward=1 and uncomment it. This enables forwarding packets between the network interfaces

16. Once the Pi comes back up, you can connect a laptop to the AP's WiFi. Give the laptop a static IP:

17. At this point, your new network should look something like this: 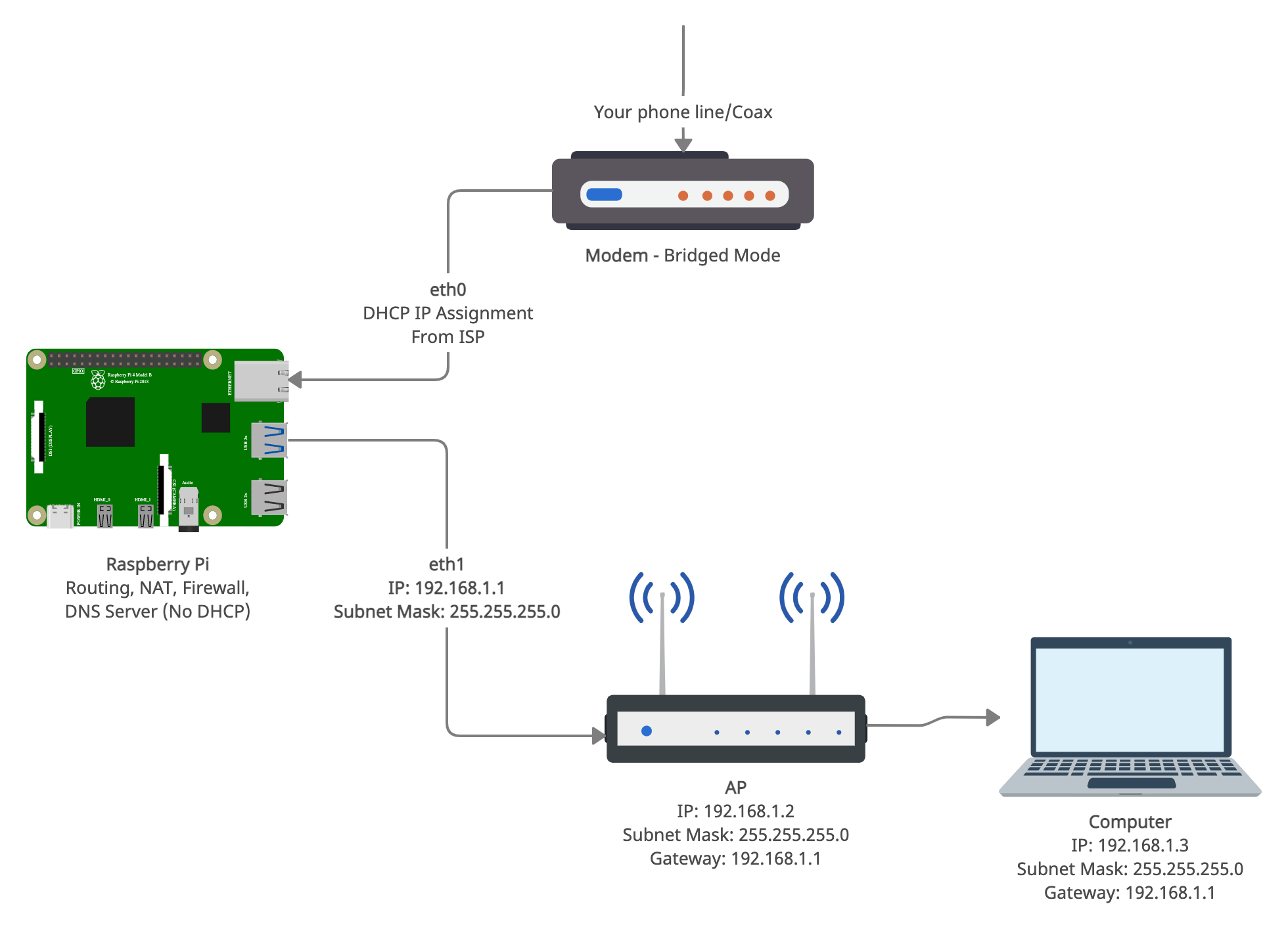 19. Edit /etc/dhcpcd.conf again and make sure it looks the same as you left it in step 12. Correct any edited lines.

20. Sign into the Pi-Hole web interface and do some basic configuration

23. Put your laptop's network configuration back to dynamic/DHCP.

OK, big moment: take a breath and try to load something on the internet. If you did everything right, you should be greeted with a successfully loaded web page!

If you want to test the rule that redirects all DNS to the Pi-Hole, configure 8.8.8.8 as a static DNS server on your laptop. It should still work, but you'll still see all queries on the Pi-Hole log and ads will be blocked. Neat!

So far, we haven't handled IPv6 - just IPv4. If you don't need it, great! But, IPv6 is the future. There are places in the world that only offer IPv6-only internet already, so it would behoove you to learn it now. Besides, if you're reading this, you're the inquizitive type! So, here's how to get IPv6 working.

Note that your ISP must support IPv6 for this to work. You can use a 4to6 gateway, but that's outside the scope of this project.

The first line enables forwarding of IPv6 Packets between network interfaces. The second one allows the Pi to accept Router Advertisements on eth0. This is necessary for automatic IPv6 configuration from your ISP

2. Edit /etc/dhcpcd.conf and configure it to look like this example here.

ipv6rs: accept router solicitation on this interface only. This is necessary for automatic IPv6 configuration from your ISP, and overrides the global noipv6rs

These two lines set the Interface Association Identifier (iaid) to 1, then requests a Delegated Prefix from it and assigns it to eth1. The 60 is the prefix length you get from your ISP, and the 64 is the length of the one you're assigning to eth1. You can get these numbers by inspecting network traffic from your router. I cheated and got it from here: https://www.reddit.com/r/ipv6/comments/deb531/linux_xfinity_dhcpcd_and_getting_a_local_prefix/

3. Create a new file named /etc/dnsmasq.d/05-pirouter.conf with the contents from here. This code does three things:

This setting really closely mirrors the one that gets set when you check off "Enable IPv6 support (SLAAC + RA)" in the Pi-Hole web interface. The difference is, this custom one also states in the Router Advertisement that it is the Router. By the way, definitely don't check off that box in the Pi-Hole Web Interface. It conflicts with this config.

4. Edit /etc/iptables/rules.v6 to match the file here. Again, there's a lot going on in this file, and it looks different from the IPv4 rules.

The *nat section is a bit of a no-no with IPv6... but I'm doing it anyway, just minimally

The *filter section protects you

5. Run pihole -r and reconfigure Pi-Hole with IPv6 Enabled. You can select all the default settings as it should read them correctly from last time, plus the new IPv6 address

6. Make sure /etc/dhcpcd.conf still looks like it does here.

7. Reboot the Pi, and disconnect/reconnect your devices to force them to refresh the connection

8. On the Pi, run ip -6 addr. It should look something like this (IP addresses anonymized to protect the innocent). The important part is that there is a public IP (non-fe80) on eth1

8. On your device in your network, check if you have an IPv6 address. You can test it with https://ipv6-test.com/.

Since the pi is sitting in the middle of all your internet traffic now, you can do all kinds of monitoring. I'm using ntopng to do that (https://www.ntop.org/products/traffic-analysis/ntop/). Ntopng is very powerful with a ton of features. It can show you the Layer-7 apps being used on your network, top talkers, top destinations, the countries the servers you're talking to are in, and much more. It has a free version, but I'm paying for the Pro embedded license (50 Euro) and I think it's worth every penny.

There's also simpler software around like darkstat. It can be installed with sudo apt install darkstat. https://unix4lyfe.org/darkstat/

Some other thoughts on the project